Amitabh Mattoo fails to convince as he bats for AII 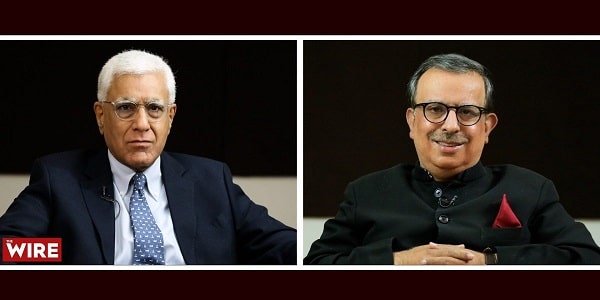 In an interview with veteran journalist Karan Thapar aired on The Wire, founding CEO and member of the governing body Dr Amitabh Mattoo was put under the spotlight on the allegations of political interference in the operations of the Australia India Institute (AII).

The Institute has been in the news since late March when it was revealed that thirteen academics had raised concerns about its vision and governance and resigned from their positions as Academic Fellows in an open letter to the Vice-Chancellor of the University of Melbourne. Their concerns related to academic freedom, “staying away” from discussions on contentious topics such as the decapitation of a Gandhi statue, the exclusion from the website of a podcast on caste, a troubling lack of diversity in the institute’s Distinguished Fellows, and most notably, the surprising appointment of the new Director, former Labor senator Lisa Singh.

In The Wire interview, Thapar repeatedly questioned Mattoo on the allegations of the Indian High Commission’s interference in certain agenda items of the Institute. Prof Mattoo, usually statesman-like as a seasoned academic and public speaker, squirmed under this constant barrage of questioning, confusing names of High Commissioners, forgetting two High Commissioners who served during the times the interference is alleged to have taken place (Ajay Gondane and Gitesh Sarma), and referring to Lisa Singh as “Senator” and “of the Labor Party”. Most surprising was his safety bookending of himself and current CEO Lisa Singh but labelling the other CEOs in between these two tenures as ‘spineless’.

Mattoo was firm that no High Commissioner would have “the audacity” to interfere when he was the director. He further added, “Senator Lisa Singh (the current director) has testified to the fact that she hasn’t (seen interference), and she is a close enough friend of mine to tell me – nudge, nudge, wink wink this is not an easy government to deal with.” Thapar’s look of incredulity that any alleged interference by the High Commission could be passed off in a nudge-nudge-wink-wink exchange between friends, told its own story.

But Mattoo continued, “But there is one director between me and Lisa Singh who was an Oxbridge dyed-in-the-wool academic and unfortunately while they are scholarly, they lack spine. If it happened, then it happened then.”

That no public denial has come from the Indian High Commissioner was also deemed worthy of discussion, with Mattoo agreeing that it was surprising and “shortsighted and counterproductive”, and agreeing later that he would put in a word.

Thapar expressed his concerns that stories such as this in the mainstream Australian press would not augur well for a burgeoning friendship between the two countries, and that steps must be taken at all levels – with the Indian government authorities as well as the academics who have left enmasse – to calm troubled waters.

For the academics in question to pen to paper to vent their frustrations regarding alleged interference, is uncharacteristic, and must reveal deep frustrations. For some like Ian Woolford, the lone battler to have publicly announced his unhappiness (while others refused our requests for interviews), the ongoing situation at the AII is far too close to the stories of colleagues in India “who have been prosecuted for thinking, writing, and dissenting.”

Universities in Australia have policies in place to strengthen and protect free speech and academic freedoms on campus, a key recommendation of the 2019 Review of Freedom of Speech in Australian Higher Education Providers. According to this, university chancellors are dutybound to publicly report each year on how they are upholding academic freedom and freedom of speech on campus.

The Australia India Institute might claim that they are a policy thinktank albeit with an interface with academics, yet as a university entity, the freedom of speech directive might well apply to them.

Twelve full days after this story broke, it seems to be gathering strength. A public statement by the University of Melbourne, clarifying each of the issues raised in the letter by the resigning Fellows, is needed to clear the air and ensure freedom of speech at centres of higher learning.