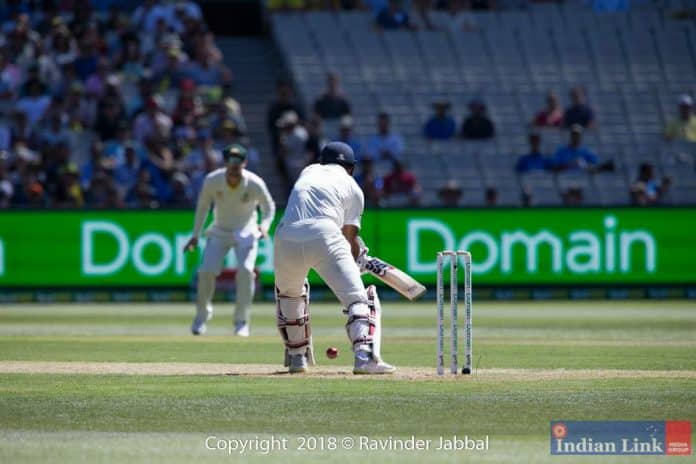 Reading Time: 3 minutesAfter the hostility, animosity and sheer drama of Australia’s series-levelling victory in Perth, this year’s Boxing Day test may well have been one of the most anticipated in recent memory. After all, it is rare that a visiting side manages to win either of the first two tests in Australia; it is rarer still that the battle ahead promises to be an even one.

The opening act in Melbourne, however, was anti-climactic at best; the chief protagonist a low, slow pitch that harked back to the previous year’s bore-fest that triggered a “poor” rating by the ICC. India, with two new openers in debutant Mayank Agarwal and the elevated Hanuma Vihari, were the happier side before play, electing to bat first. Despite Tim Paine’s suggestion after the toss that he may have bowled first if given the choice, it was painfully obvious to even the most casual of observers: this was always a bat-first pitch, and India consolidated their advantage by labouring to 2-215 at stumps.


In spite of the docile pitch, it was Vihari who blinked first; the makeshift opener labouring to 8 off 66 balls before succumbing to a short ball from Pat Cummins. But Agarwal, fresh off the plane after being rushed into the Indian squad, flourished, guiding India to the break with no further damage with a sense of assuredness belying his debut. Both before and after lunch, Agarwal unfurled a series of glorious drives against Nathan Lyon, who has otherwise been unchallenged this series. In keeping with the unpredictable nature of this series, after looking all but destined for a century on debut, Agarwal succumbed for 74 to another Cummins short ball one minute before the the tea break.
Facing the first ball of the final session, Virat Kohli would have been unperturbed by the chorus of boos that rang around the less knowledgeable sections of the stadium on his entry to the pitch; Australian fans have never shied away from vilifying the biggest perceived opposition threat (think Murali, du Plessis, Broad). He would have been far more concerned about the excellent spell into which Cummins, the anchor to the Kohli cruise ship, had settled shortly after tea. Also threatening was Mitchell Starc’s three over spell from hell with the second new ball, which saw Kohli dropped by his counterpart in the final moments of the day. Those storms too, Kohli weathered on his way to 47*, lacing along the way some sumptuous on-drives.

Through it all was the stoic Cheteshwar Pujara, the leading run-scorer in the series and fast regaining his mantle as the critical lynchpin in the Indian batting order. As flamboyant was Agarwal, so too was Pujara obdurate. The 73,000 strong crowd may not have been on the edge of their seats when he was batting, but crucially neither were the Australian players; that has always been the very purpose of Pujara’s modus operandi. With a nudge here, a nurdle there, and the occasional flash of anger against width outside off, Pujara accumulated 68* by stumps.
To some, India, having spent much of the day hovering at 2 runs per over, may have missed a trick in not seeking to press home their advantage earlier in the day. That is a premature conclusion, with one team yet to bat on the pitch, and this series having already proven that slow and steady remains a valuable practice. Relevant too is that Rohit Sharma, Rishabh Pant and Ravindra Jadeja are all capable of – and in fact inclined to – score at a frenetic pace, to more than offset the Pujaras and Viharis before them.
The Indians know this much: any innings which puts overs into the legs of the Australian bowlers is a successful one. The rewards may come the next day, the next innings or even in the next match, but it is vitally important for India to blunt the edge of Australia’s world-leading attack.
Kohli and his charges will hope to do more of the same tomorrow.
- Advertisement -
Share
WhatsApp
Facebook
Twitter
Linkedin
Previous articleRecipes from grandma
Next articleBoxing Day Test Day 2: Where are the Australian fans?