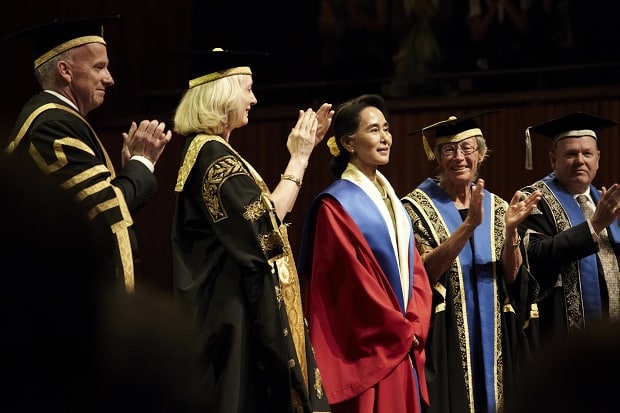 “My attitude to peace is rather based on the Burmese definition of peace – it really means removing all the negative factors that destroy peace in this world,” once remarked Nobel Peace Prize winner and pro-democracy activist Daw Aung San Suu Kyi. The essence of this quote of Ms Suu Kyi was reflected in almost all the addresses she delivered during her recent maiden visit to Australia, to encourage global interest in democratic reform in her country Myanmar, formerly known as Burma.
As expected, Ms Suu Kyi’s six day official schedule from  November 27 upto December 2 was packed with engagements that included meeting Prime Minister Tony Abbott, Foreign Minister Julia Bishop, Governor General Quentin Bruce, members of Myanmar community and receiving honorary doctorates from three top universities – Sydney University, University of Technology, Sydney and Australian National University in Canberra.
Sydney University and UTS jointly conferred the respective honours at a function held at the concert hall of Sydney Opera House where every available seat was filled, signifying the immense popularity of a person who has dedicated her life to peace, human rights and democracy. It is interesting to note that the last time the two universities held a joint degree ceremony was to honour another global inspiration leader, Nelson Mandela.
Ms Suu Kyi now 68, is fittingly compared with Gandhi, Mandela and Martin Luther King. Like them, she is a keen follower of non-violence, liberation, equality and justice. Her strength to lead and inspire people naturally comes from her father General Aung San who fought for Burma’s independence from the British in 1947, but was unfortunately assassinated in 1955.
After her father’s death Ms Suu Kyi lived abroad in India, England and United States and returned Burma in 1988 to take care of her ill mother, leaving behind her husband and two sons in England. At that time, Burma was passing through a period of great political turmoil and stood behind the people fighting for their democratic rights. She was soon held under house arrest and achieved unconditional release only in 2002.
Many of Ms Suu Kyi’s thoughts and feelings came out when she spoke at the Sydney Opera House after receiving the university honours. She talked about relationship with her father, the choices she opted for in her personal life and about the three pillars on which she sees Myanmar united and reformed – democracy, human rights and national reconciliation. When questioned on Australia’s asylum seeker policy, she said justice should be tempered with mercy, reflecting again her thoughts on peace and humanity.