Auntyji: When life gives you nimboos… 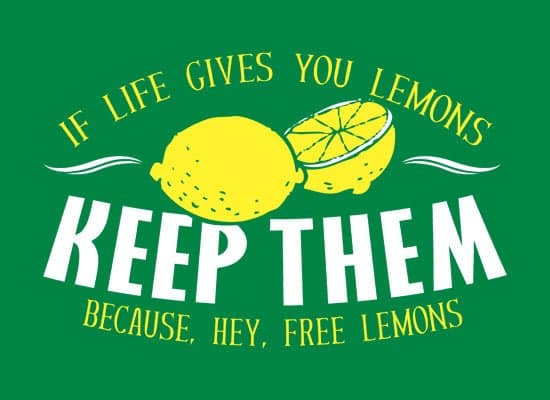 Dear Auntyji
Suniye to, Auntyji. My mother is 86 years old and she is a sprightly old saperan. She can talk underwater with a mouth full of bhujia. She has a rai on sub kuch. Aur, wo sub jaanti hain kiske ghar me kya ho raha hai. Anyway, Mum has a nimbu tree in her backyard that she is devoted to. Now, her neighbour of 40 years is also her best saheli and they always spend time with each other. But lately, over the last 6 months I have seen my mother standing at her kitchen window grumbling. Once I even saw her waving a rolling pin at someone outside the khidki. When I ask her what is wrong, she says that Pushpa from next door is standing near the lemon tree, leering at the nimbu with her kaali kaali ankhen. My mother then insists that with Pushi’s evil eyes, the lemons will turn sour and fall from the tree. I too have seen Pushpa staring at the nimbu and twice my daughter Jiah has stopped me from yelling at Pushi from my kitchen. Auntyji, batao nah, how do we stop this evil eye? I have tied a black thread around the tree but I am concerned that Pushi’s eyes are very strong. Kuch salah dijiye please Auntyji.

Auntyji says
Ya khuda! He Ram! Bachayiye mujhe. Now suno meri baat, this evil ankhen is just a figment of you and your crazy mother’s imagination. Just because someone stares at something does not mean that it will wither away and die. This is not quantum physics where atoms behave different when someone’s evil eyes are on them. The nimbu ped will be fine. What I need you to do is to stop believing in this folklore and superstitious nonsense, and most of all, stop encouraging your mother as well. Tell your mother that people’s eyes don’t control lemon trees, if anything, the nitrogen composition of the soil will have more to do with the quality of the fruit than Pushi’s lustful gaze and malicious glare. Also, aren’t lemons supposed to be sour? How will Pushi’s pernicious peep render them tart? If this is the case, then you should invite Pushi over to stand under the tree and sing bhajans to make the lemons even more khatte. Win win for all!
Sydney jalebi, bhai waah

Dear Auntyji
Last week I had an unusual encounter that I wanted to share with you. Auntyji, I was home alone and I was watching Deewar on YouTube and eating jalebis which I had bought from Harris Park. Now it was raat ke das baje (10pm at night) and I was home akeli. Then, from the corner of my eye, I saw a saaya move near my door. Ram ki kasam it was the same shape and size of my late aunt, and I even smelt the chameli perfume she used to wear before she passed. I was so amazed that I called out, Nilo kaki, is that you? And Shivji ki kasam I heard, Haan, Radha, main hoon na. And then the hairs on my arms stood up and I was so shocked and pareshan that I immediately called my husband and told him to come home (he was next door playing patte (cards) with the neighbours). Auntyji, can you explain this phenomenon to me please? I have heard of things like this happening, but it’s my first encounter and I wanted to hear your thoughts on this.
Auntyji says
So there you are, late at night, sitting there like a haathi stuffing your muh with jalebis, and you get a massive sugar rush, and the insulin spike and load on your liver causes you to have a hallucination. And somehow, you thought you had a close encounter with Nilo kaki. Look, I wouldn’t have been surprised at all if it was indeed Nilo kaki who came to visit you to warn you that your sugar consumption habits so late at night would hasten your journey into the afterlife to join her.
I understand that jalebis from Harris Park are pretty special, and yes, once you have one, you must have the pura pakit, but seriously, raat ko? What did you think was going to happen? This is the fast track way to get diabetes, you know. So yes, I am pretty sure Nilo kaki came to wean you off your beemaar, najais habits. It’s such a shame she did not stop by your padosi‘s house to advise your husband that playing patte at raat time is shaitaan ke kaam also. By the way, Deewar is such a good film na? That Amitabh, such a national treasure he is. Do you think he eats jalebis raat ko? Of course not. He is not a petu.