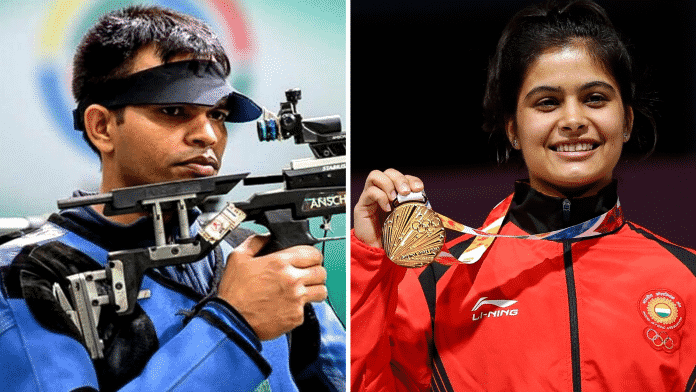 Manu and any other Indian shooter was ineligible to win an Olympic quota as the country has already exhausted them in earlier competitions. She put up a dominant showing, shooting 584 in qualification and 244.3 in the final to take gold. Chinese Asian Games champion Wang Qian took the silver with a score of 242.8.

Yashaswini Singh Deswal, who is the other shooter apart from Manu to have won a quota in the event, shot 578 in the qualifiers and finished sixth in the final with a score of 157.4.

The third Indian in the Asian Championship event, Annu Raj Singh, shot 569 for a 20th place finish. The trio went on to win bronze in the team event with a score of 1,731, with Korea winning gold and China the silver.

Vivaan and Manisha beat the Chinese pair of Ting Zhang and Pengyu Chen 34-29 in the gold medal match. The latter had qualified for the final with a record score.

In women’s 10m air rifle, Anjum Moudgil missed the final by the smallest of margins while Apurvi Chandela finished 12th. Elavenil Valarivan, however, made it to the final and finished fifth with a score of 187.1.

Indian shooters have so far secured 10 Tokyo Olympics quotas in rifle and pistol events and lie behind China (25 quotas) and Korea (12) in the Asian region.