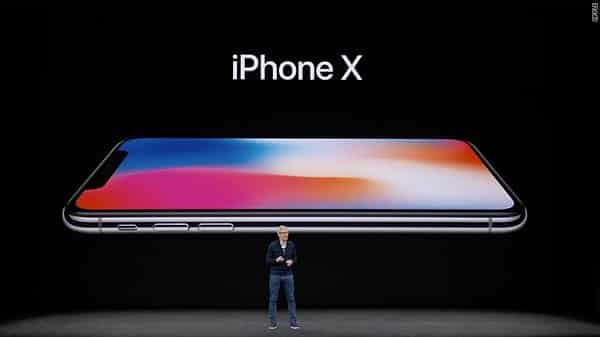 Living up to the hype it generated on the 10th anniversary of iPhone, Apple has unveiled iPhone X with facial recognition system, iPhone 8 and iPhone 8 Plus, new Apple Watch Series 3 and Apple TV 4K.
The device can be pre-ordered from October 27 and will be available from November 3 in stores. The iPhone X will cost A$1579 for a handset with 64GB, or A$1829 for one with 256GB of storage.
Hosting the event for the first time at the opulent Steve Jobs Theater on the new Apple Park campus in Cupertino, California, the tech giant introduced iPhone X – an ultra-premium model.

iPhone X sports a unique ‘FaceID’ facial recognition system to unlock the device. Just look at your phone to unlock it. The feature is enabled by a ‘True Depth’ camera system in the A11 neural engine.
Wearing a hat, glasses or new hairstyle will not fool the FaceID system that also works with Apple Pay.
The device with 2046 X 1125 resolution supports HDR in Dolby Vision, HDR10 and True Tone and comes in Space Grey and Silver colours with ‘Super Retina’ display.
Users can tap on the screen to wake up iPhone X that has 12MP dual-camera system with deeper pixels and dual optical image stablisation at the rear. iPhone X does wireless charging via Qi technology.
The iPhone 8 features a new 6-core A11 Bionic processor which is 70 per cent faster than the previous A10.

Apple also introduced Animoji where users can animate an emoji and share it on social media.
Apple also showcased a charging mat called ‘AirPower’ that charges iPhone, Watch and AirPods. The mat will be available from next year.
The tech giant also introduced iPhone 8 and 8 Plus (in Silver, Space Grey and Rose Gold colours) that house wireless charging technology with an improved retina displays.
The iPhone 8 and 8 Plus will be available in 64GB and 256GB. The iPhone 8 will start from $A1079, while the iPhone 8 Plus will start from $A1229. Both devices will be available for pre-order beginning September 15 and will be in stores beginning September 22.
The iPhone 8 features a new 6-core A11 Bionic processor which is 70 per cent faster than the previous A10.
iPhone 8 and 8 Plus – both still have home button intact — feature new sensors. The lenses feature f1.8 and f2.8 apertures (which is brighter than the 7 Plus telephoto) in the iPhone 8 Plus.
According to Philip W. Schiller, Apple’s Senior Vice President of Worldwide Marketing, the iPhone 8 cameras and the A11 Bionic chip have been calibrated for Augmented Reality (AR).
Jeff Williams, Apple’s Chief Operating Officer, unveiled Apple Watch Series 3 with cellular connectivity built in.
The Apple Watch Series 3 will start from A$459 for the 38mm aluminium GPS version and A$499 for the 42mm. The GPS + cellular Apple Watch Series 3 will be A$559 and A$599 for 38mm and 42mm respectively.

“You can keep the same number as your iPhone to make and receive calls. Maps will work on Series 3. Location will switch over to your watch automatically,” Williams told the gathering.
Apple Music will come to Apple Watch, allowing you to stream directly 40 million songs. Ask Siri to find your favourite track.
“With 50 per cent year-on-year growth, Apple Watch is the number one watch brand in the world, eclipsing Rolex, with 97 per cent customer satisfaction,” CEO Tim Cook announced.
Cook also introduced the new Apple TV 4K, designed to deliver a stunning cinematic experience at home.

With support for both 4K and High Dynamic Range (HDR), Apple TV 4K features unbelievably sharp, crisp images.
With Apple TV 4K, viewers can enjoy a growing selection of 4K HDR movies on iTunes.
“Bring the magic of the cinema straight to your living room with the new Apple TV 4K,” said Eddy Cue, Apple’s Senior Vice President of Internet Software and Services.
Netflix and Amazon Prime 4K videos are coming to Apple TV as well.
The Apple TV 4K will go on sale in Australia on Friday 22 September, with pre-orders opening on Friday 15 September.
The Apple TV 4K with 32GB of storage will cost $249 in Australia, and the 64GB variant will cost $279.
Earlier, dedicating the theatre to Jobs “because we loved him and because he loved days like this,” Cook said: “Jobs’ vision and passion lives here on Apple Park and everywhere around us”.
-IANS, News.com.au