Annual convention of Young Sikhs looks to the future

Elevate 2020, the annual conference of the Young Sikh Professionals Network, deliberates on community trends for the future 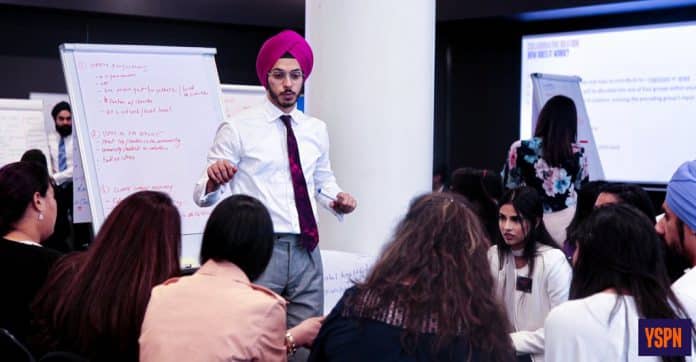 The realities of the changing composition of the Sikh community in Australia, most of whom are migrants working in structurally declining industries, has provoked a group of young Sikh professionals to think about how best to serve the migrant community.

Given this desire to serve the community, “Sangat (community) of the Future” was the aptly chosen theme for the Young Sikh Professionals Network (YSPN) annual conference, Elevate 2020, held on 22 February in Melbourne. The purpose of this annual conference is to inspire young Sikhs and to collaborate on solutions to some of the most pressing issues affecting their community. The conference, attended by 120 delegates from across Australia and New Zealand, featured some of the most eminent Indian leaders from the region who canvassed their career successes and spoke on the broadened scope of sewa (selfless service) to create a more visible community.

In the report Economic Impact of Sikhs prepared by YSPN for Elevate 2019, an analysis of data from the last three census findings revealed that Sikhs are the fastest growing ethnic minority in Australia. Between 2006 and 2016, the Sikh community experienced 404% growth, with a current population of 125,000 people. However, a deeper look into this data shows that there is a disproportionately high representation of Sikhs in structurally declining industries due to factors such as rapid automation. This risks forming a divided community with an underclass of less-skilled migrants, a disengaged middle and an upper-class elite. Against this backdrop, YSPN challenged the delegates to take ownership of these issues to help shape the ‘Sangat,’ or community, of the future.

Delegates learnt from the success stories of eminent Sikh leaders from political, health, business and entrepreneurial backgrounds. Dhruv Deepak Saxena, Director of Riverina Oils and Bio-Energy, captivated the audience in his keynote speech as he spoke about overcoming the struggles of building credibility during his career as an Indian immigrant. Mr Saxena called for the audience to strive for a future where the Western world recognises more than lone figures of success such as Ajay Banga and Sundar Pichai as representatives of the Indian community. Rather, he expressed the dire need for the Indian diaspora to band together to create collective success, which will bolster the credibility of the entire community.

In the panel discussion ‘Igniting the Dormant Potential of Migrants’ speakers Amit Singh (Senior Advisor for AlphaBeta), Mandeep Sodhi (founder of HashChing) and Shamila Gopalan, (CEO of Herwit) discussed the inherent desire for every person to be seen and to be heard. The insight gained here was that the established community can and must support new migrants in navigating their new environment. Ms Gopalan’s female perspective was particularly inspiring as she spoke of the need for women to guide, motivate and embolden their sisters, especially recent arrivals, to pursue their goals.

Recognising the surplus motivation, skills and energy that exists in our community, a second panel discussion explored how we can channel these resources to ‘Coordinate Sewa Across the Community.’ Dr Malvindar Singh-Bains, a neuroscientist at the University of Auckland Centre for Brain Research and Young New Zealander of the Year finalist, amazed delegates when she described how she took brain specimens to her local Gurdwara to teach children about brain disease. Ms Singh-Bains used this as an example to illustrate the ease of how we can selflessly serve our community with our pre-existing knowledge and skillset.

As the day progressed, the energy in the room became palpable as delegates felt empowered and excited to develop the solutions to the community’s most pressing problems. YSPN challenged delegates to diagnose and solve these problems through a facilitated workshop session centered on the pillars of migration and sewa. The groups distilled their ideas down to eight solutions that delegates were invited to pledge their commitment to. In addition to the delegates pledging their time to execute these initiatives, over $5,000 in donations was received on the day through a crowdfunding campaign, which reinforced the enthusiasm among delegates to see these initiatives come to life. Among the solutions were: a comprehensive migrant support website, gurudwara pop-ups for migrants, partnering with migrant service organisations, and an online platform to connect sewadars (volunteers) with those migrants who need help navigating through life in Australia.

The night also featured a Q&A session with corporate leader Pam Bains, CFO Aurizon, who spoke on how networks and mentorship were instrumental in her career success.

The night’s proceedings concluded with Ramneek Singh, Chair of YSPN, presenting the new strategy of YSPN. In his speech, Mr Singh described the renewed objective of the organisation is to ‘channel sewa to develop ethical Sikh leaders for a productive and inclusive broader community.’

The conference demonstrated the ambition that exists among young professionals to take on the issues that are currently hindering the progress of the Sikh community.

Personally, I believe this event was immensely successful and forward thinking. With the seeds now sowed, I’m excited to see these projects come to life and the legacy they will leave for the community.

YSPN was formed in 2012 with the aim of empowering young Indian diaspora in the workforce by providing mentorship, developing networks and building advocacy in the Sikh and Australian professional communities. To learn more, visit www.yspn.org.au