The play directed by B Jayashree portrays progressive destruction of the myths deeply embedded in the lives of people in an Indian village. 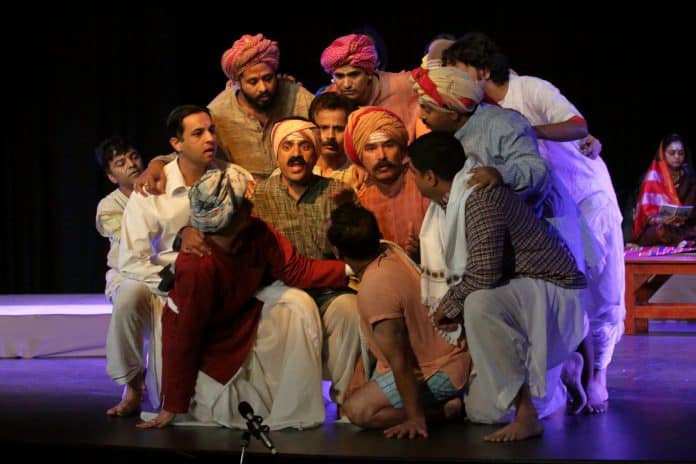 Reading Time: 2 minutesAnivaasi arts collective in Sydney is a vibrant group of theatre enthusiasts from the south Indian state of Karnataka. It was founded in 2000 by the creative couple Veena and Sudarshan; both practically grew up on stage since their school days, participating in Kannada theatre during its golden period under stalwarts like BV Karanth, Prema Karanth and B Jayashree.

Migrating to Australia only increased their yearning for creative activities and with like-minded theatre buffs, they started Anivaasi. To date, Anivaasi has produced five plays with critical acclaim and experiments with various other artforms like story reading sessions, folk music and exploring the genre of theatre music.
Of course, Sudarshan’s foray into the world of film-making is well known, with films such as Oasis (that was screened at the Barcelona and Rome film festivals), Mukhamukhi (based on JB Priestley’s famous play An Inspector Calls that won the state award for best dialogue) and Thallana in Kannada (won the Best Film Award). The co-founder of Anivaasi, Veena has represented Sydney Indians in events like the Short & Sweet theatre festival, and has also directed plays for stage and radio.

The Anivaasi troupe recently invited the famous thespian Padmashri B Jayashree, a doyen of Kannada theatre to Sydney to direct her play Karimaayi and also organised a day long festival, B.Jayashree Rangotsava highlighting Jayashree’s talents as a great singer, actor and a disciplined director. Her talents have been acknowledged in the various awards she has received including the prestigious Central Sangeeth Natak academy award.
After a morning session of candid conversation with the NSD graduate about her journey in theatre, stint as an MP in the Indian Parliament, and her fond memories of having interacted with Om Puri and Naseeruddin Shah in her autobiography Kanna muchche Kaade goode, (a rustic game), her film Koudhi (Blanket) was screened. Jayashree’s realistic portrayal of an exploited rural artist was remarkable as was her stance in bringing out the inner strength and fortitude of an illiterate village lady.

The evening’s presentation of the drama Karimaayi filled Bankstown’s Bryan Brown Theatre with robust energy. The play comprising of 40 artists was enacted by Sydney artists under Jayashree’s direction and was put together in just under four weeks, with a vibrant chorus set to music by Jayashree herself.
The theme of the play is the progressive destruction of the myths deeply embedded in the lives of an Indian village, and was presented using a typical folk style called Bayalaata. It was a truly remarkable experience, both for the artists and the audience.