From Dungeons & Dragons to contemporary art

An avid fan of pop culture, Roy's work is a monument to his lifelong love and passion for the tabletop role-playing game of Dungeons And Dragons. BY MITAL PAREKH 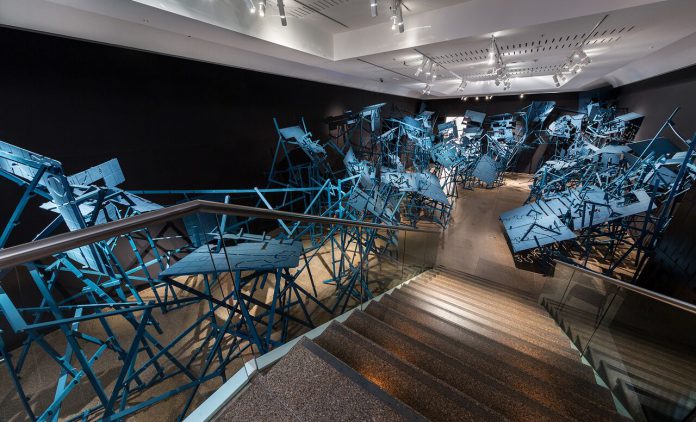 Reading Time: 2 minutesDrawing inspiration and turning your childhood tabletop game into a real life sculpture is not what many of us would do for a living.
Thin Walls Between Dimensions is a sculptural creation by Roy Ananda for the 2018 exhibition titled Divided Worlds. Displayed in the basement entry to the Art gallery of South Australia Roy offers viewers to experience his imaginary underworld. An avid fan of pop culture, Roy’s work is a monument to his lifelong love and passion for the tabletop role-playing game of Dungeons And Dragons.


Head of Drawing at Adelaide Central school Of Art Roy’s work frequently draws inspiration from various aspects of popular culture that might fall under the banner of ‘geek culture’ (for instance films, literature, comics and games rooted in the fantasy, science fiction and horror genres). Roy was among the various artists whose work was exhibited from all over the country.
“My contribution to Divided Worlds is the latest in series of monuments to pop-culture fandom, in this instance centering on the tabletop role-playing game Dungeons & Dragons. The work has been specifically conceived as the first encounter as viewers descend the stairs to the basement level of the Art Gallery of South Australia,” Ananda tells Indian Link.

“For me, that journey has always called to mind the great mythological descents into the underworld: Orpheus attempting to rescue Eurydice from Hades, Dante’s exploration of the Inferno, and, as a lifelong Dungeons & Dragons enthusiast, the subterranean journeys into the lairs of evil wizards and long abandoned dwarven mines that are the settings for the game. My parents bought me my first Dungeons & Dragons rules set when I was 10 years old and I have no doubt that a childhood and early adolescence spent devising and inhabiting imaginary spaces (castles, dungeons, forests etc.) laid important groundwork for my later sculptural endeavours.”
He adds, “The starting point for my work is a map of an underground maze described in the game which has been transposed onto 48, 1.2 metre square MDF panels which incrementally unfold across the cavernous space at the base of the gallery stairs. The particular map I have utilised was included in the game’s introductory boxed set during the late 1970s and early 1980s and represents a notional space that has been traversed in the imaginations of literally tens of millions of people. As such, the work also considers how ‘real’ this imaginary space has since become, and how a sculptural extrapolation on it might bridge the gap between make-believe and a tangibly material outcome.”
His imagination is filled with various aspects of pop-culture which has led him to address Star Wars, Warner Brothers cartoons, the horror fiction of H.P. Lovecraft and others in the past.
- Advertisement -
Share
WhatsApp
Facebook
Twitter
Linkedin
Previous articleTravelling through time
Next articleA new generation of mums