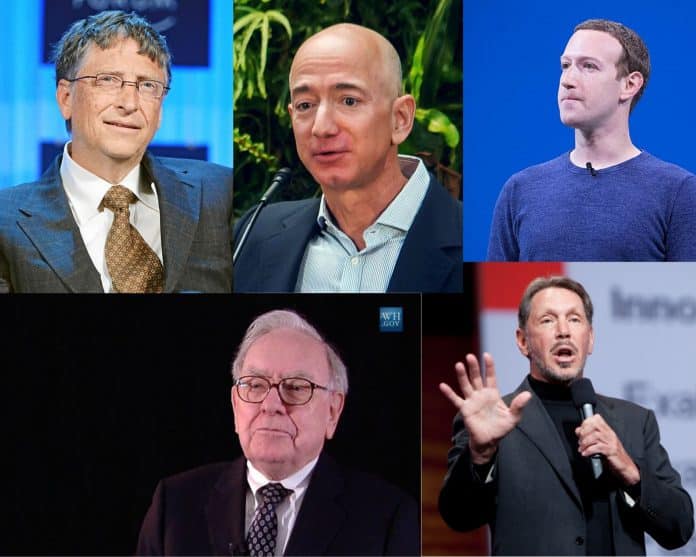 The top five US billionaires – Jeff Bezos, Bill Gates, Mark Zuckerberg, Warren Buffett and Oracle’s Larry Ellison – saw their wealth grow by a total of $75.5 billion, or 19 per cent.

According to a report by Americans for Tax Fairness (ATF) and the Institute for Policy Studies Programme on Inequality (IPS), America’s billionaires bound far ahead financially even as the rest of America was locked down.

“The surge in billionaire wealth during a global pandemic underscores the grotesque nature of unequal sacrifice,” said Chuck Collins, director of the IPS Program on Inequality and co-author of the ‘Billionaire Bonanza 2020′ report, “While millions risk their lives and livelihoods as first responders and front line workers, these billionaires benefit from an economy and tax system that is wired to funnel wealth to the top.”

Between March 18 and May 19, the total net worth of the 600-plus US billionaires jumped by $434 billion or 15 per cent, based on the group’s analysis of Forbes data.

During this period, more than 38 million working Americans lost their jobs, nearly 1.5 million Americans fell ill with the virus, and almost 90,000 died from it.

“Low-wage workers, people of colour, and women have suffered disproportionately in the combined medical and economic crises. Billionaires are overwhelmingly white men,” the report mentioned.

Decades of tax cuts for the rich have fuelled the growth of billionaires and their wealth.

“The pandemic has revealed the deadly consequences of America’s wealth gap, and billionaires are the glaring symbol of that economic inequality,” said Frank Clemente, executive director of Americans for Tax Fairness (ATF).