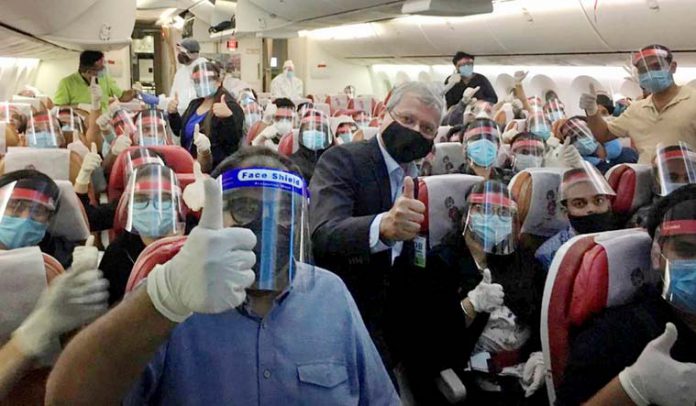 Following a petition in the Bombay High Court about social distancing on Air India repatriation flights, the Supreme Court will allow middle seat bookings only till 6 June. After this, flights will not be operating at full capacity, limiting the number of travellers back to India on each flight.

The bench conducted an urgent hearing on Eid holiday, through video conferencing, to hear the appeals of the Centre and Air India.

Both the Centre and Air India had argued that middle seat vacancies would not serve the purpose of limiting transmission of the coronavirus.

Solicitor General Tushar Mehta has stated that this move will increase difficulty and anxiety at airports.

“In some cases, the travel plan of families who were travelling together has been disrupted because those in the families who had middle seats have to be offloaded and remain behind,” he said.

There has yet to be an announcement on Phase 2 of India’s Vande Bharat repatriation flights, but this new order is expected to reduce the number of available seats.

Before the Supreme Court’s latest order, Civil Aviation Minister Hardeep Puri had made a statement it was “not viable” to keep the middle seat vacant, citing risk of transmission and pricing concerns.

“Even if you keep middle seat vacant, you’ll still have a situation where prescribed distance for social distancing isn’t followed. If you were to do it, then you’ve to hike up airline ticket price by 33%,” he had explained.

For passengers travelling back to India on Air India repatriation flights, it is mandatory to download the Aarogya Setu app. They are required to web check-in and carry a print out of the boarding pass before arriving at the airport. During the flight, they must maintain social distance from co-passengers, wear masks and protective gear, and carry sanitiser at all times.