Air India Group to send 64 flights for Indians, passengers to be charged 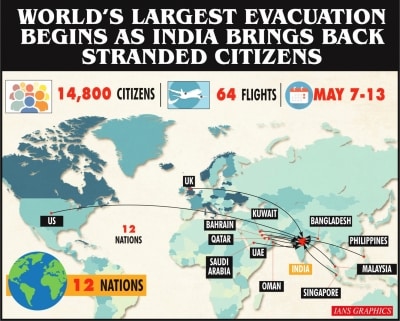 India is set to embark on one of the largest rescue operations in the world, sending ships and planes to bring back Indians stranded abroad, with Civil Aviation Minister Hardeep Singh Puri on Tuesday announcing that the Air India Group will operate 64 flights to 12 countries to bring back over 14,000 stranded people in 7 days from May 7.

Passengers would be required to pay a fixed amount for the ferry service, for instance the one-way all inclusive fare between Chicago to New Delhi will be charged at Rs 100,000, while that for Dhaka-Delhi at Rs 12,000 and Manila-Delhi at Rs 30,000.

Addressing the media via video conferencing, the minister said that during the first week of the mammoth air rescue operation, 14,800 Indian nationals will be brought back, while the total number of people to be repatriated back to India in the entire operation could be more than 190,000.

In terms of operational aspects, Air India will operate 40 flights, while Air India Express will fly 24 services to countries such as Malaysia, Singapore, Philippines, Bangladesh, Oman, Bahrain, Qatar, Kuwait, Saudi Arabia, the UAE, the US, and the UK.

Puri said that not only the role of the airline but that of airports and state governments is vital since these authorities have to manage the returning passengers.

On their part, the state governments are required to provide quarantine zones for the returning Indians.

Puri said that in the first week, flights will bring back Indians to 10 states adding that services to more states could be started in the coming weeks, depending upon the speed at which facilities are prepared to host these returnees.

He further said that passengers would be required to pay a fixed amount for these flights, since the financial position of Air India is precarious and that the airline requires injection of Rs 500-Rs 600 crore per month for it to stay afloat.

Besides, the minister said that participation of private airlines in the air rescue plans will be taken after the first week of operations.

Puri added that he is aware of the financial constraints being faced by the industry. However, he did not disclose any timeline for the resumption of domestic operations, but said that these will be opened only after seeing the “behaviour of the virus” and the ground level preparations to handle any situation.

Lately, despite its precarious financial position, the national passenger carrier has emerged as one of the few airlines in the world that have evacuated more than 9,000 passengers during the Covid-19 crisis.

The airline till date has carried out massive flight operations to China, Japan and Europe to bring back stranded Indians, mostly students and pilgrims. Additionally, the airline has been instrumental in repatriating foreigners to Israel, UK and Germany.

Moreover, Air India and its subsidiary Alliance Air has reached every corner of the country to supply essential medical equipment.