From 31 March, AI will fly to Delhi from Sydney 5 times a week. HARSHAD PANDHARIPANDE and SANDIP HOR report 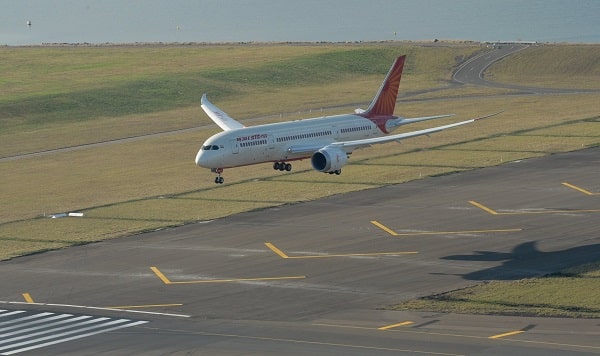 Reading Time: 3 minutesFlying nonstop to India is set to get easier. Starting 31 March, Air India will launch another nonstop flight to New Delhi from Sydney. This will increase the frequency of the Sydney-New Delhi flight to five times a week. The new flight will operate on Saturdays, whereas the existing ones fly out on Tuesdays, Wednesdays, Fridays and Sundays.
Speaking at the formal announcement event at India Cultural Centre on 15 March, Air India’s Australia Manager Sujoy Kishore said, “The morning service from Sydney and return mid-morning flight departing Delhi will ensure convenient connections to and from India and international destinations.
The new Saturday services continue to be operated by a two-class state-of-the-art, Boeing 787 Dreamliner, with 18 Business Class seats and 238 in Economy.”

The timings for the Sydney-Delhi flights are 10.45am on Tuesdays, Fridays, Saturdays and Sundays and 11.10am on Wednesdays. Air India also operates thrice-a-week nonstop services from Melbourne to New Delhi and back.
Kishore said that Air India was the overwhelming choice for Indians, especially families, those with young children or senior citizens. “With Air India, there is a level of comfort and trust, apart from our world-class service and on-board amenities,” he said.
The official said that a generous baggage allowance of 30kg in economy class and 40kg in business class, a fleet of very young Boeing Dreamliner aircraft, a wide variety of entertainment and cuisine selection, top-of-the-line amenities and reliable timings all made Air India the top option to travel to and from India.
“What makes flying to India with Air India even better is that we offer connections for free or at a nominal cost of around $50 to several cities within India,” he said. The free connections are between Delhi and Bengaluru, Mumbai, Kozhikode, Kolkata, Coimbatore, Kochi, Hyderabad, Chandigarh, Chennai, Trivandrum and Vishakhapatnam, an Air India media release said.
Apart from the flight announcement, the event seemed an earnest effort to project Air India at par with other airlines. While it is true that several Indians prefer Air India over other carriers, there are also many who have less-than-charitable things to say about India’s soon-to-be-privatised national carrier. Calling on people to change this perception, Chandru Appar, Consul (Trade and Commerce) Head of Chancery, said, “The effort should begin with us Indians. There are many who have speak negatively about Air India without even experiencing it first-hand. If those of us living in Australia promote it among our wider social circle, we will see more and more non-Indians choosing Air India.” He added that things were already changing for the better as he had observed that 10-20% non-Indians travel by Air India, whereas earlier, the flight would have Indian passengers almost exclusively.

With 147,000 Indian tourists visiting NSW alone in 2017, Air India would undoubtedly be eyeing a large slice of the inbound travel pie. Equally importantly, some 293,000 Australians visited India in 2016. Air India will hope to cast its net wider to attract some of these tourists too.
A way to do this would be to introduce daily flights, said Anil Kaul, Air India’s new Regional Manager, Australasia. He said efforts were on to secure prime time slots at originating airports. “Our other priority is to make the Melbourne-Delhi service five times a week, too,” he said. He added, “With the fifth flight (from Sydney), we are the strengthening the connectivity over Delhi to international points including the UK/Europe, Indian subcontinent and the latest addition, Tel Aviv that commenced on 22 March.”
Air India also organised a function at Manjit’s At The Wharf to introduce Kaul to key members of the local travel industry. Apart from networking with representatives of various associations and organisations, Kaul outlined thoughts on expanding Air India’s presence in Australia and expressed interest to work with the industry to move forward.