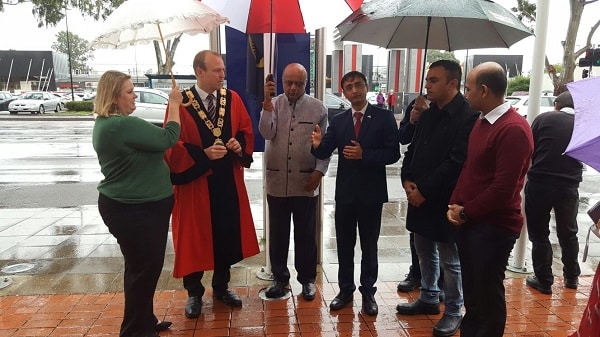 One day many years ago, I happened to see the Indian flag being raised outside my workplace. “Hey! What are you doing with my flag?!” I almost shouted at the man hoisting it up. It was to welcome some dignitaries visiting from India, but I was so surprised to see the tricolour going up that I did not know whether I was shocked or pleased.
But this year on 15 August, when I saw the Indian national flag go up outside the City of Unley Council Offices, there was no other emotion but joy and pride.
It may be the first time in South Australia (probably Australia) that a Council has, of its own volition, shown respect for and celebrated India’s Independence Day with a flag hoisting ceremony!

On a cold, wet morning, the Lord Mayor of Unley, Lachlan Clyne came out in all his mayoral regalia to raise the Indian tricolour in the City of Unley.  It was still raining a little when we went out to the front of the building, on Unley Road (which is Unley’s main thoroughfare) but that did not dampen the mayor’s and other staff’s enthusiasm in raising our flag. The Indians present on the occasion sang the National Anthem loudly, hearts filled with pleasure. There were even some damp eyes – it is something very special to see the tiranga go up and fly in an adopted country. On such occasions, we realise our feelings for the land of our birth are just as strong and special!
In a short speech, the mayor acknowledged the importance of the day and said he felt proud and honoured to be celebrating it with members of the Indian community, especially the residents of Unley. He welcomed greater involvement of the Indian community in council activities and said the Council would always support Indians to settle in Unley and celebrate their culture and traditions including festivals and national days.
Chirag Trivedi of Australia India Business Council spoke briefly on behalf the Indian community. He thanked the Mayor and hoped that gestures like this would lead to greater opportunities for Indians in Unley and also greater business opportunities for Unley in India.

Speaking to Indian Link, the Mayor said the decision to hoist the flag was made as a sign of Council’s acknowledgment that for our Indian brothers and sisters this day has a great deal of significance. “It is our way of saying, if it is significant for you, it is significant to me,” he said. How had it come about? He had met with Chirag Trivedi earlier in the year to discuss a range of issues. “We talked about culturally significant days and Independence Day came up. I asked how such a day was commemorated in India and Chirag talked about the parades and the raising of the Indian flag. Raising the Indian flag is something we can easily do as part of a ceremony.”
After the flag hoisting, Mayor Clyne and his staff also made community members very welcome for a morning tea and chit-chat about Unley’s plans to boost rapport with the Indian community.
“Relationships grow naturally,” said Mayor Clyne. “Based on the good will created today we will look at how we might be more involved in the future to support Indian festivals. Today I heard a number of attendees express how touching it was for them to be involved in the ceremony which warmed my heart. Talking to them, I felt that the flag raising has helped the Unley Council to bond more strongly with its Indian-Australian community.”
With this step by the Council, and the Mayor’s empathic, hands-on attitude, we are sure bonds with the Indian community in Unley will grow and get stronger very soon.
Everyone who passed by on Unley Road on 15 August would have noticed the flag and every Indian would have felt proud to see it fluttering against the Australian sky. And we can look forward to more such events in Unley!