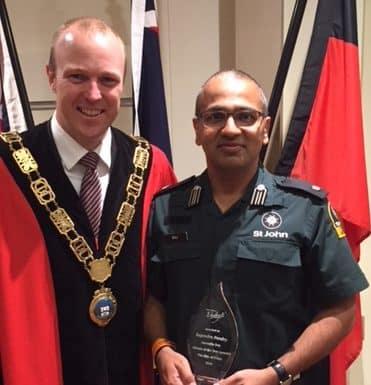 When I congratulated Rajendra Pandey for being awarded the Citizen of the Year Award for Unley City, I asked him what the criteria were for this award. In essence, why had he been given this award? Quite humbly, he replied, “I think the only criterion was that you have to be a citizen.”
How simple! But what he did not add was that you had to be a good citizen, an outstanding citizen. These awards recognise people that are making outstanding contributions to the community.
The Citizen of the Year Award is presented by the Australia Day Council of South Australia and Media Partner Channel 9, and are administered by local Councils across South Australia. On Australia Day every year, every local council names their respective Citizen of the Year.
Pandey was named Citizen of the Year for his local community, Unley. So what outstanding work does he do for the community? He is the City East Area Manager for St John Ambulance (a volunteer role), Multicultural Communities Council of SA (MCCSA) Board member, President of the Vishva Hindu Parishad (SA Chapter), an Australian Army Reservist and an Ambassador for Volunteering. And all this within six years of arrival in Australia!
“Don’t wait till you are fully settled before you start contributing to society,” he says. “The skills you gain from volunteering will help you in your employment and the satisfaction you gain from volunteering will help you settle better in the new country.”

And he speaks from experience. Soon after he arrived in Adelaide, Pandey did his First Aid Training and decided to volunteer with St John’s. He was a volunteer First Aid Officer posted at public events and in emergencies. As well as being a First Aid Officer on ground, he also moved up to manage a small division of volunteers. Now, five years later, he is an area manager responsible for 200 volunteers across several divisions, still in a voluntary capacity.
As President of SA Chapter of Vishva Hindu Parishad (VHP), Pandey organised a highly successful national conference last year in which Hindus from various countries living in Australia participated. Under his leadership, VHP is also actively involved in community work like regular awareness raising workshops on legal and health issues, a self-funded activity centre for senior citizens from culturally and linguistically diverse backgrounds, Hindi and Sanskrit classes for children, yoga classes and especially free ‘Yoga in the Park’ sessions. Recently, a women’s forum has been added to the list where women will get support and take charge of their professional development and career growth.
Pandey was nominated as a Board member of MCCSA, a top multicultural organisation in South Australia, in recognition of his contribution to the community.
In his day job as a senior manager in the Education Department, provides services to students who are disengaged or at risk of disengaging and also to obtain the best value for public money. He is also a Lieutenant in Australian Army Reserves and spends most Tuesday nights and some weekends as an Army Reservist.
Pandey hopes to inspire migrants to give back to the community. “Our Sanatana Dharma teaches us to go and above and beyond our call of duty and give back to the larger community,” he says. And this is what he would like everyone to do. “Not only will we be helping other people, we will, more than anything, be helping ourselves,” he said.
Along with due congratulations, I wished him the best in his future endeavours too. For he does not seem to be a person who will rest on his laurels!
- Advertisement -
Share
WhatsApp
Facebook
Twitter
Linkedin
Previous articleIndia being outplayed by China
Next articleAustralia's likely first Hindi novel unveiled