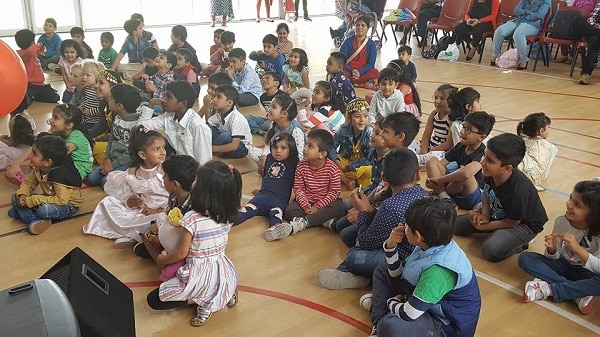 Art. Sport. Performance.
These are endeavours that come to mind when we think of kids’ activities.
There was plenty of each of these, at the recent children’s day celebration organised by the Federation of Indian Communities of South Australia (FICSA).
The Dennison Centre at Mawson Lakes was filled with laughter, joy, colours and giggles.
There was opportunity for dress-ups too. The event started off with a fancy dress competition, and saw a robot, a cowboy and a fly, yes a fly, walk off with the first of many prizes on the day.
The highlight of the event though was the painting competition. Children aged 3-5 were given colouring options whereas kids aged 5-11 and 12-15 were given topics such as ‘A day at the beach’ and ‘Favourite Indian festival’. Many little ones seemed highly involved in this competition.

Local Indian artist Shampa Bruweleit judged the competition and widely appreciated the artistic talent in the Indian community. Honing in on the enthusiasm all around, she told Indian Link that events like this could also involve workshops in Indian folk arts such as Madhubani painting from Bihar, tribal Warli painting from Rajasthan and Kalighat painting from West Bengal. This would introduce the kids to the centuries-old arts of their homeland, as well as provide these dying arts a new avenue for survival.
The kids got to sit back and relax as magician Simon took the stage; he kept everyone entertained for a good hour. The event was concluded with a presentation by the Australian Air League and its cadets. This popular civilian-operated youth organisation aims to inculcate an interest in aviation, and has had a fair few interested Indian-origin kids joining in. The interest could be seen yet again on this occasion, as many parents spent a lot of time with the commanding officer and cadets learning about the outfit.
Apart from all these artistic and sports endeavours, the kids also got an opportunity to showcase their performing arts skills.

From dancing to singing, stand-up comedy to playing musical instruments, kids took over the stage with their creativity.
The event was inaugurated by City of Salisbury Lord Mayor Gillian Aldridge who acknowledged the contributions the Indian community brings to the region. FICSA President Umesh Nagasandra told Indian Link that the events like this encourages confidence and self-esteem in young children.
The event, the third of its kind, was widely appreciated by local parents and the community. All the children received a certificate of participation and winners in each category of the different competitions received prizes.