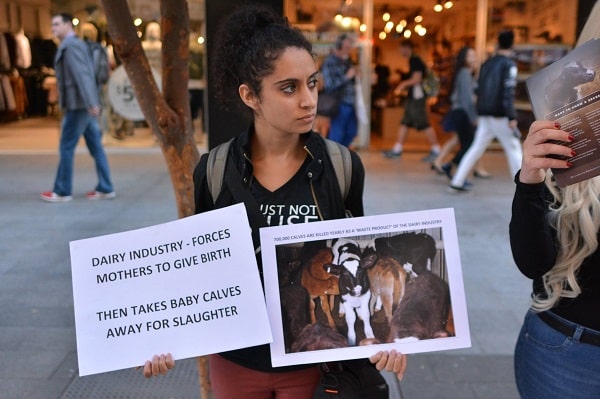 Most of us have fond memories of being told childhood stories of farmyard animals and singing the nursery rhyme Old MacDonald had a farm. These farms are happy places where ducks swim in a pond, little piggies roll around in the mud, cows and sheep graze on the lush green grass and chickens happily cluck away in the far distance, playing until the sun sets, only to wait for their next adventure.
I have certainly grown up being told of such a happy place, where animals of all shapes and sizes live a decent life, out of harm’s way. Through these stories we teach children to be respectful towards other beings and that most often stories will have a happily ever after ending.
Sadly, the reality of these animals tells a different tale – one that some might find too confronting to bear.
Animal welfare advocate Apoorva Madan knows the reality facing animals in animal industries too well. As a psychologist, she is clinically trained to provide assistance to those who suffer from compassion fatigue, a common risk among animal activists.
News about animal abuses in the dairy industry has begun to come in with increasing regularity. The disturbing footage of bobby calves being taken away at just a day old, the forced pregnancies and the inevitable slaughter of cows that can no longer produce high quality milk is brought to the forefront of traditional and online media – courtesy of a handful of animal activists.
Speaking to Indian Link, Apoorva said, “Over the recent years, there has been a large amount of footage collected from various farms around the country showing the immense fear and pain that these animals experience every day,” Apoorva said.
“This is confronting work for animal activists who seek to capture and share what is happening to our animals in these industries so that people are better informed when making consumer decisions.”

She added, “The animal welfare standards in Australian meat, dairy, egg (and other animal use) industries are alarmingly poor. For example, to produce milk for human consumption, cows are forcibly impregnated almost yearly, which is an immense physical burden on the body.”
Voiceless, an organisation seeking to be a voice for the voiceless released ‘The Life of the Dairy Cow‘ report in 2015. This report stated that around 800,000 dairy calves are considered ‘waste’ and are “either killed on-farm or sent for commercial slaughter within just five days of life, often ending up as pet food or used by the pharmaceutical industry.”
The report disclosed that farmers can slaughter calves by “chemical euthanasia, the use of a firearm or stunning by a captive bolt.” It is even more distressing to know that “a newborn calf can also be killed by striking their head with a blunt instrument, such as a hammer.”
The lack of animal welfare laws across Australian jurisdictions means these practices are considered acceptable across other animal industries, as Apoorva explains. “In the egg industry, it is standard practice to kill male chicks in the millions, as they are considered ‘waste’ products to the industry. In the farming of pigs, it is legal for pregnant pigs to be kept in ‘sow stalls’ – which are metal enclosures so small that the mothers are barely able to stand, let alone move forward or backward. Mother pigs will stay in this condition during their pregnancy. It is also standard practice to cut the tails of piglets and remove their teeth without any pain relief.
“This is done so that pigs do not cannibalise each other, which often happens because pigs become so psychologically distressed in these conditions.”

The Australian Pork Limited announced that the use of sow stalls will be voluntarily phased out by the end of 2017. Unfortunately, there is no law binding the industry to meet this commitment in most jurisdictions. Only the ACT and Tasmania have enforced legal restrictions on the use of sow stalls.
The light at the end of this sad tale is the existence of consumers who make informed decisions. They are the heroes of this story. As they vote with their wallet and demand improved animal welfare standards by purchasing free-range eggs or by making changes to their diet, the industries listen to the consumer dollar as Apoorva explains.
“Veganism is spreading rapidly, which makes sense – we are living in the age of social media where information is widely available. Industries can no longer hide behind their false advertisements convincing customers that animal products come from happy and willing animals. People are learning the truth about the lives of animals, and as a result, are making changes in their lifestyle choices. I am confident we will continue to see veganism grow.”
As consumers, the choices you make will decide the ending of this story.
Write to your local MP about seeking animal law reform in your state.