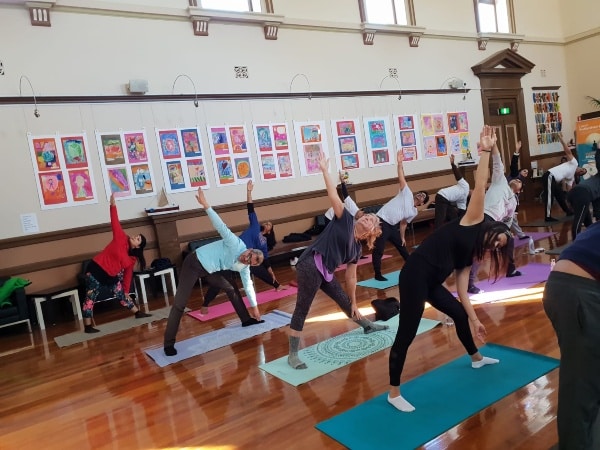 Reading Time: 2 minutesAs Adelaide marked the International Day of Yoga this year on 21 June, the sun was clement and showed up for most of the day.
You might or might not know that the sun has special significance in this worldwide event. When proposing to the UN 21 June as the date to mark this age-old practice, India’s Prime Minister Narendra Modi had pointed out its distinct quality as the longest day of the year in the northern hemisphere, and the shortest in the southern hemisphere.
In the fifth year this year, the city of Adelaide saw various events held by Yoga schools and cultural and socio-religious organisations on 21, 22 and 23 June.

IAASA, the Indian Australian Association of South Australia held its own event on 22 June, from 11 am to 12.30 pm at the IAASA Hall. As a long-time practitioner and teacher of Yoga, I myself spoke on some essential elements of the practice which can be applied to our daily life to help us lead a healthy and grounded life. I also conducted a yoga session attended by some keen members of the community. President Narayan Rai said he would like to see this become a larger event going further.
In another event, the Consul General of India (Sydney), Mr Manish Gupta, Adelaide City Council and the Art of Living Foundation Adelaide organised a well-attended event on 23 June at the North Adelaide Community Centre.

Attending this morning event were Rachel Sanderson (Minister for Child Protection) representing the Premier of SA Steve Georganas; Assistant Minister Carolyn Power; Councillor Helen Donovan (representing Lord Mayor of Adelaide City), and Coucillor Surender Pal Chahal who impressed not only with his speech, but also with his agile participation in the yoga session that followed.

Vivek Kulkarni led the yoga, starting with gentle warm up and ending with Shavasana.
Veerendra Tripathi acted as the ‘sutradhar’ (the one who deftly holds all the threads and produces a fine end result) of the event and did a great job as always.
I will end with salutations to the great masters of yore who conceptualised and brought forth this simple path to leading a sublime life, Yoga.