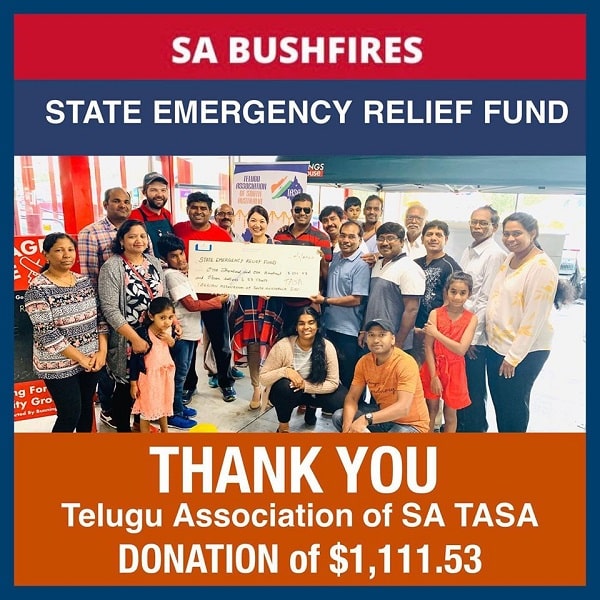 Late December, as we planned our annual visit to Lobethal in the Adelaide Hills to see the Christmas Lights, the shocking news came: a huge bushfire was raging there. This was too close to home – only 40 kms from Adelaide.

This is how Christmas was for most South Australians. Directly in the path of a massive fire or worrying about the people and firefighters in the regions.

These have been the biggest bushfires so close to Adelaide in many years. More than 125,000 hectares have burned in the Adelaide Hills. The perimeter of the fires was 127 kms!

On Kangaroo Island 200,000 hectares have been burnt, which is nearly half the island.

Finally with some rain and cooler conditions on 10 January, the firefighters were able to stop its further spread. But not before the fire had burnt for 2 weeks, claimed 2 lives and dozens of houses and hundreds of other buildings.

The Telugu Association (TASA) held a Bunnings Sausage Sizzle and all profits were donated to Premier’s Relief Fund. Indian restaurants in the Adelaide Hills and nearby suburbs have offered free food for people affected by the fire.

Shivagarjana, the Marathi drummers, decided on a donation drive with drumming in Rundle Mall which attracted a lot of attention (of course!) and donations too. This was such a great effort that a follow-up event was immediately planned for Glenelg Beach.

The Sikh community collected enough to fill a truck and a van with things needed by the firefighters, relief workers and the population like non-perishable food, gloves, medical and veterinary supplies etc and took them over to Kangaroo Island in person.

It’s been comforting to see the community stand together to help those in need.