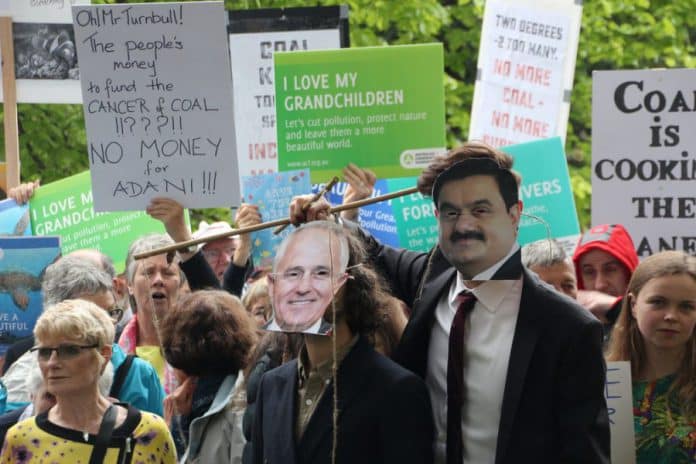 Only days ago, former Prime Minister Kevin Rudd and shock jock Alan Jones found themselves as panellists on ABC TV’s Q and A program. Watch the video
Jones, whose voice dominates Sydney radio airwaves, is known to be like a bulldog over a bone, so tenacious are his views on any topic on which he has made up his mind. He has been very vocal in his opposition to the Adani Group’s Carmichael coal mine being set up in central Queensland. He is the public face of the anti-Adani ads on behalf of campaign group Lock the Gate, which seeks to ‘stop the taxpayer loan to Adani’. In the ad, Jones expresses his disbelief at the potential use of taxpayers’ money to help fund the $16.5 billion coal mine.

All sides of politics – the Greens excluded – seem to back the Adani project. During his last visit to India, Australian Prime Minister Malcolm Turnbull had a number of requests from India’s corporate leaders to meet with him. The list, it seems, included leading IT companies such as TCS, Wipro and other businesses either doing work with Australia or keen to engage.
Yet the only one-on-one meeting which Turnbull took, blessed by Indian PM Modi, was with Gautam Adani.  Photos of both the Prime Ministers and Gautam Adani, splashed across the media in Australia, only raised the ire of those in opposition to the mine. The Labor party has also committed to this project.

In the lead up to the Queensland elections, both the first-term incumbent  Labor government currently led by Premier Annastacia Palaszczuk, and the Liberal National opposition currently led by Tim Nicholls, have endorsed the project. At stake, cry the political leaders, are 10,000 jobs to be created in Queensland which is suffering the downturn of the resources boom. Not true, say those who oppose the mine – they count new jobs to be created at less than 2,500.
Yet, a recent survey by company ReachTel of 2,194 Australians found that 55.5 per cent of voters said they opposed the project, with only 26.1 per cent in support and the balance undecided.
And so, why are the governments in power – the Coalition at the federal level and Labor in Queensland –  willing to face community backlash on this project?

To get an insight in the workings in the Prime Minister’s office, Alan Jones asked his fellow panellist former Prime Minister Kevin Rudd this question, “Nothing adds up (on the Carmichael project). So why are these political leaders falling over themselves (to endorse the Adani deal)?”
With bated breath, one waited for the answer from the former leader of the government who could have shed some light… but before Kevin Rudd could answer, another panellist jumped in with a different issue.
And to the dismay of the Stop Adani brigade, host Tony Jones did not come back to the question at hand, passing it off as a comment.
What a blunder from Australia’s pre-eminent journalist.
The answer would have been fascinating.
- Advertisement -
Share
WhatsApp
Facebook
Twitter
Linkedin
Previous articleHomebush boy Akshath Senthil is Premier’s Spelling Bee runner-up
Next articleDeepavali Milan