Leading a group of students to Nepal - a year after its devastating earthquake - is a teaching experience of a completely different sort, writes ASHA CHAND 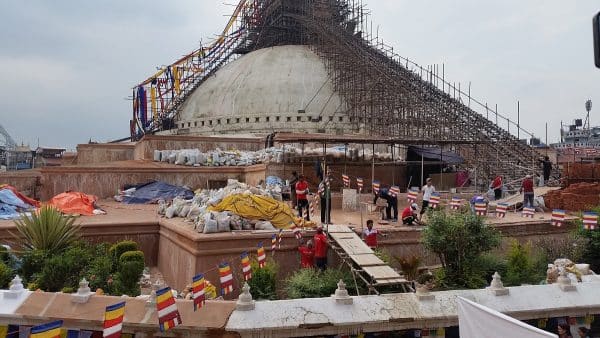 When I applied for federal government funding to take a group of students from my Feature Writing unit at Western Sydney University, to Nepal to immerse in the country one year on from the aftermath of the April 2015 earthquakes through the National Colombo Plan, I had no idea of what I was getting myself into.
I had just thought of Fiji where I spent most of my childhood and recalled how I survived so many hurricanes and cyclones that totally uprooted us and transported us back to struggle street.
I never thought that the Nepal we were travelling to would wrench my heart and bleed my soul, begging where to from here and where does one start rebuilding or even healing?
Rubble in the form of dirt piles, rubbish strewn in every corner, hundreds of wires in a knot, concrete slabs, tree branches, clay, dried grass, tin sheets, old sarees and rags as well as tarpaulins have created their signature spots while some of these provide shelter for those who live in makeshift homes.

Many people sleep by the dirty roadsides, among rubbish, dogs and noisy neighbourhoods. I saw many people in deep sleep and did not have the heart to take photos. What right do I have, to judge and parade their condition?
Despite their continuing struggles and more than 500 more tremors since the ‘big’ earthquake, the Nepali people seem content and happy – happier than the level of contentment I have seen and experienced in Australia and Fiji, the two places where I have spent most of my adult life. They are not whingers.  They share and make do with whatever little they have and there is room for everyone, families, friends, fellow humans, cows, dogs and other animals.
When they slumber into sleep at night, the nation’s problems seem to be tucked away, veiled only temporarily, like the makeshift homes built with fleeting privacy and a rocky foundation.
Only when the sun shines onto Nepal, does one get to see the condition of suffering.

On the streets of Kathmandu, people are constantly moving, arriving at temples and prayer houses, buying offerings of flowers and sweets, sweeping shop fronts and letting the rubbish pile up in front of their businesses, opening shops and businesses although they may not have a single sale in days.
The chaos of movement in all directions is most felt on the roads which are crowded beyond capacity; yet provide room for humans, vehicles of all shapes and sizes, cows, dogs, push carts, bicycles and motorbikes. Some shop owners say that they have not made any sale for months.  Tourist numbers have also plummeted since the earthquakes, mainly because of people’s fear of the ongoing tremors. In the 15 days that we spent in Nepal, from May 22 to June 5, we experienced four tremors, ranging in magnitude from 4.3 to 4.7.
The students who travelled to Kathmandu say that this experience has taught them to value and appreciate what they have; and most importantly share – their living spaces, food, money, knowledge and skills. I feel privileged and honoured to have received the NCP funding for the students and support from the School of Humanities and Communication Arts for my trip.

My heart bleeds for Nepal, a country that is endowed with so much richness in natural resources; rivers, mountains, fertile soil and abundance in tourist attractions as well as rich cultural and religious heritage sites, yet is among the poorest of the poor in living standards.
Slow rebuild
SANDY CHEU on the hardships in Nepal, as well as the resilience and strength
Half-built houses, mountains of bricks and endless prayers at the local Stupa define the recovery of Nepal a year after the 2015 earthquake.
For a country in such desperation and need for aid, the positivity and purity in the community overshadows the despair.
The sacrifices to assist rebuilding the severely damaged parts of Nepal are nothing short of rewarding to many locals.
Two mothers, Budha Mani and Krishna Maya arrive in Patan Durbar Square at the break of dawn every day to carry bricks on their backs for reconstruction work.

The long hours, little pay and strenuous labour are in hopes to not only support their children, but to revive the once bustling city.
The recovery process has been painfully slow and the cost to rebuild Nepal is huge to an already poverty-stricken country.
The Nepalese government have promised Rs 200,000 ($2,500 AUD) per affected family to assist rebuilding. However, only a very small percentage have received funding.
This has left many with no choice but to live in temporary tents next to their homes, wearily hoping that they will receive aid throughout the fourteen districts that were affected by the earthquake. Many families had no choice but to leave Nepal and head to countries in the Gulf to find work.

Kunda Dixit, writer, editor and publisher of the Nepali Times has said that while Nepal has received a lot of funding from Australian Aid and charity organisations, it is not enough.
“We need to increase tourism,” Kunda Dixit says. “It has been on its biggest decline since the earthquake. People need to come to visit Nepal and do some trekking.”
Endless rows of shopfronts are empty, with no one but persistent owners calling out to every tourist to come visit their store.
Some small entrepreneurs have received assistance with their businesses through the Rapid Enterprise and Livelihoods Recovery Project (RELRP). However, many shop owners have not been able to get back on their feet.
We have been able to journey through distinct parts of Nepal from visiting the Swayambhu Temple, going to Durbar Square, hiking to the World Peace Pagoda, exploring multiple Stupas, seeing the White River, boarding a mountain flight over the Himalayas and paragliding across Pokhara.

At each of these locations we saw a different side to Nepal and their culture – one built from hardships, resilience and strength that has never wavered. At the end of the day, the Nepalese remain optimistic.
“Life is tough here but we have to live,” says Budha Mani.
Sandy Cheu is a journalism student at Western Sydney University. She was among a group of five students who accompanied Senior Lecturer and journalism area convenor, Dr Asha Chand, to Nepal to report on recovery efforts post the 2015 earthquakes. The project was funded through the federal government’s New Colombo Plan and supported by WSU’s School of Humanities and Communication Arts.