Aakash Odedra: Rising to the sky 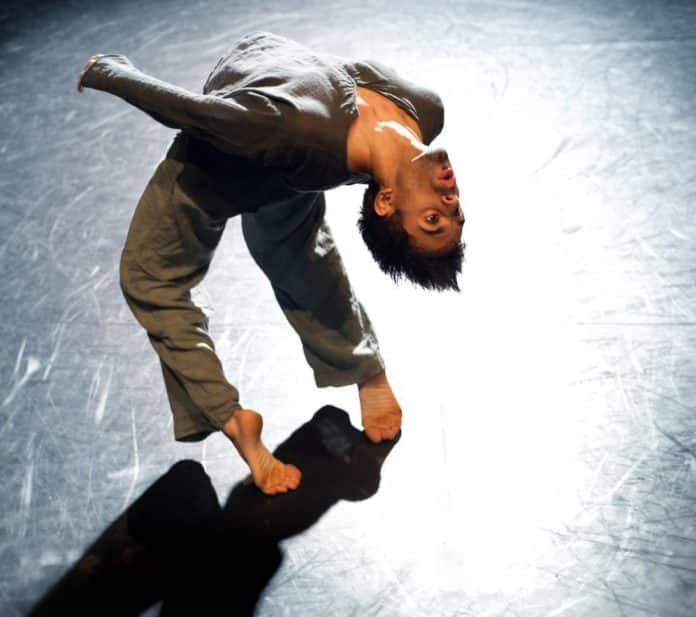 A solo dance performance can be a big ask: there’s nowhere to hide, all eyes are on you.
But Aakash Odedra rose to the occasion brilliantly in a production called Rising, at OzAsia Festival in Adelaide recently.
A Kathak exponent, Aakash has been dancing for 24 years and has evolved his own style. An extension of the traditional, it is an exploration into the power and freedom available in contemporary dance.

He describes it himself as “taking away the shringar or the decoration of Kathak, dipping Kathak into acid, and putting it on stage so what remains is the essence of that.”
He showed off this transformation from Kathak to pure dance wonderfully in his Rising segment entitled piece Nritti. As he flew across the stage to lively, loud sarangi music, there was not a ghungru in sight – a huge departure from tradition. With easy movements including going round the stage on his knees in a fluid motion, he was a dancer in command.
What we witnessed was Kathak pulled out of its jewel-encrusted straight-jacket and taken on a journey of freedom, emotion and joy.
Nritti was part of an hour-long performance, comprising four different pieces, each with some gold-plated backing. Renowned dancers and choreographers Akram Khan, Russell Malliphant and Sidi Larbi Cherkaoui choreographed a segment each. The fourth, Nritti, was Aakash’s own composition.
What does contemporary dance give Aakash that Kathak may not?

“I think Kathak’s forte and its speciality is its structure, but that is also its obstacle as well at the same time,” Aakash replied. “There’s no one who’s gone and put massive sign-posts saying the ‘Do’s and Dont’s’, so there is more of a chance to explore”.
A significant aspect of Rising was that it took Aakash well over a year to get his body and mind attuned to contemporary dance. And he did this with the help of Adelaide choreographer Lewis Major, who Aakash invited onto the stage at the end of the show to acknowledge his friend’s contribution.
Of Akram Khan’s piece, In the Shadow of Man, Aakash explained, “Akram wanted to explore the animal element or the raw physicality of the human body… so the piece is very raw and very awake.”
This number began with a cone of light on the body. The mood on stage was dark, with wild movement and contortions, clawing and searching, all perfectly synchronised with the resounding music. Suddenly Aakash began moving as if on roller-skates. It was a choreography of pain with movement as he bent over backwards, almost touching his head to the floor. The action was all seen through a hazy light, with the sounds eventually changing to vocals as this piece came to a close.
It is clear that Akram Khan has been a huge influence on Aakash. “Akram is a formidable force of nature when he dances,” he revealed. “He’s like an older brother and even today when I was practicing I was thinking of him. I keep referring back to how he guides me.”

Of Cut, the third dance choreographed by Russell Malliphant, Aakash said, “It’s a relationship with the lights, so it’s abstract. There’s no straight narrative through that piece – it’s up to your own individual interpretation. It’s very physical; it’s to do with the relationship of the body and space and of how things shift in light. It’s like creating architecture in space when actually the architecture doesn’t exist… and it’s only when you switch on the light that you see these columns that have appeared from nowhere”.
The dance itself was ghostly; like electric currents with limbs in and out of light and shadow, set to vibrant music. At times the arms looked like childrens’ glow-sticks. The dance asked for patience, caution, imagination, and by the time Aakash finished, in a swirl of Sufi-like pirouettes, the audience was completely won over.
In the number choreographed by Sidi Larbi Cherkaoui, light bulbs representing celestial bodies hung at different levels and swayed to represent constellations.
“Larbi is quite a lyrical person,” Aakash revealed. “He took the inspiration from my name Aakash which means sky, and called the piece Constellation”.
The balletic dance in movements interspersed with stillness and spirituality rounded off the memorable evening.
It turned out to be quite the celestial rising for Aakash Odedra.
- Advertisement -
Share
WhatsApp
Facebook
Twitter
Linkedin
Previous articleLet it shine
Next articleCalling migrant Indian women: A survey on female sexuality