A post-mortem of the postal service 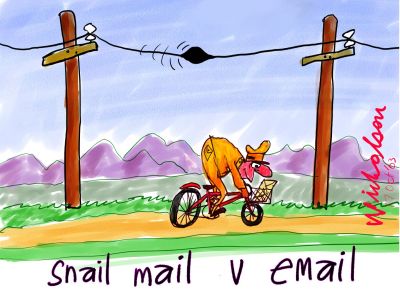 These dayswe live in the e-Age. Starting with the Stone Age and passing on through the Bronze and Iron Ages, we are well and truly in the e-Age: e-Bay, e-Book, e-Mail. If you think the little ‘e’ stands for electronic, you are in serious error. In my book that harmless ‘e’ is evil, pure and simple. It stands for elimination, eradication and even extinction.
Let’s start with e-Bay, which has shrunk the whole world into a global supermarket. You can buy anything that takes your fancy from anywhere in the world just by pressing a few buttons. Great! But slowly it is decimating the department store near you. In my beloved Adelaide, since our arrival a few decades ago, half a dozen department stores have bit the dust. One is now a car park, another a gym and a third one has been remodelled as a court. No basement bargain or discount justice here though.
Of course not all of those stores were e-victims. Now only three stores are left, with one of them likely to be devoured by another. Most menfolk probably won’t mind this as it may sour their spouses’ shopping sprees and spare some more brass for their beer. But before you jump for joy, women will find ways to rejoice in their retail therapy since the electronic aisles are now open 24/7.
Turn the next leaf to the e-Book. Same story again. For the book stores, Kindle is the unkindest cut of all, to borrow the Bard’s phrase. Barring serious bookworms, the general public won’t feel the impact. Books in the format we have known to read and rejoice in since the days of Guttenberg will somehow survive since you can’t take a Kindle to the beach or bed without upsetting the sleeping partner. Try as they may, Facebook whiz kid Zuckerberg and his ilk will face a long-drawn battle to boot the book out of our lives.

But the biggest game changer is the seemingly innocuous e-mail. Drowned by the email tsunami, Australia Post is sketching its survival mode. The option of selling the business to the private sector after 205 years as a public utility will not be unique. But, if the new owners don’t make enough money, will it end up in the DLO (dead letter office)? Not likely, since they can always learn a trick or two from the nation’s first post master, convict Isaac Nicholas, who prospered in the position.
Another suggestion is to cut down mail delivery to three days a week. One local scribe suggested once a week is enough. I can better that suggestion. Mail from friends and relatives, who seldom write these days, can be delivered whenever; letters from mothers-in-law never, and bills returned to sender.
Australia Post’s demise will mean much more than loss of a service. It will have grave social consequences. The loss of hundreds of jobs will obviously affect many families and the local economy. On a wider scale it will affect mum and dad’s super returns. Sounds farfetched? Mail boxes, like everything else, are made in China. If demand drops, China will reduce its iron imports from Australia, impacting BHP’s profits and its dividend returns to super funds.
Another industry that will be licked is the production of stamps. Australia is known for issuing colourful stamps on a variety of subjects that are highly sought after by collectors. The designers, printers and collectors could be stamped out if Australia Post shuts up shop.

Letter boxes at our front gates are much more than mere receptacles of mail. Their size, style and structure – from a simple steel box to ornate brickworks – broadcast to the world outside the taste, character and status of the householder. The day the box becomes extinct may spell the end of civilization as we know it, since our ability for written communication has put us on a pedestal above other living creatures.
Up until late ‘70s, posties used to deliver mail twice a day and then blow a whistle to signal the recipients – for many of whom walking twice to their mailbox was their only physical exercise. Obsolescence of mail service may worsen the obesity problem and bulk up the national health budget. The posties too, who once did their rounds on bikes, are now using scooters causing them poor health and post-traumatic stress disorder when faced with unruly hounds.

The demise of the postal service will affect animals too. Posties and dogs are proverbial foes. The very sight of the deliverer makes the mongrels bark deliriously which helps maintain their lung power. Missing their favourite targets, they may have to bark up the wrong tree causing the canines PMT (post mailman trauma).
This post-mortem may be premature, but slowly yet surely the e-mail is slugging the snail mail.