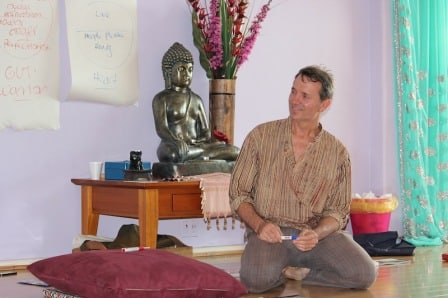 We would normally expect an Indian to be in charge of an Ayurvedic healing centre in Melbourne, but instead we are introduced to Peter Noblet, a professional Ayurvedic practitioner. This inspirational individual has twelve years experience in the field, and is an accomplished trainer of one of the oldest martial art forms in the world namely, Kalaripayuttu. Peter has been successfully running the Kalari Healing Centre in Highett since 2007. Walking into the centre, we are transported to a different world with a quintessentially Indian ambience.
Peter spoke to Indian Link about his foray into this rather unusual profession. After graduating in Ayurvedic medicine in 1999 in Australia, Peter travelled to Kerala where he stayed for a year gaining hands-on knowledge and experience in Ayurveda from Satguru Sri Hanuman Das. And it was during his stay at the Dharmika Ashram in Trivandrum that his Guru advised him to take up Kalaripayuttu, an ancient martial art that has its origins in the state. Peter travels to the ashram every single year for dharshan and to improve his knowledge and skills in both Ayurveda and Kalaripayuttu.
So what lured him towards the ancient medicinal system? “I love the fact that Ayurveda is authentic, earthy and a mystery that unfolds everyday,” he says. “Its beauty lies in its use of non-invasive medicines and techniques, and it has withstood the test of time. It comes with a lot of wisdom and the techniques applied in Ayurveda balance three important paradigms in a person – mind, body and spirit. Also, my desire to help and heal people has been the driving force behind my foray into this branch of medicine, which is not complex but humans are, and I want to make humans simpler,” he adds, tongue in cheek.
While nearly 80% of the population in India adopt ayurvedic treatment to cure various illnesses, this branch of medicine is almost complete unknown to people in Australia.
“People here don’t know enough about Ayurveda and it’s all about educating the community about its benefits through workshops and courses, which I organise quite often,” says Peter. But despite this lack of awareness, he took a calculated risk at starting the healing centre. “Yes, it’s been a risk and I’ve had to work really hard to promote Ayurveda in the community, but it’s a process which I’m committed to teach and pass on to the next generation. I must admit though, that the reputation of KHC has grown in the local area. I have a regular flow of clients who visit me for various treatments such as yoga and meditation,” he claims.
Most people are under the impression that Ayurveda is less effective if started midway through a serious illness, but Peter vehemently says, “Modern medicines are effective, but they take a toll on the body. Ayurveda is preventative and in the case of a severe illness, it helps restore balance between mind, body and spirit, which in turn helps eradicate the root cause of the disease”. But for this to work, the person must undergo a 2-4 week program wherein a complete overhaul of lifestyle is advised, including diet and other daily habits. For example, a cancer patient will first be put through procedures to cleanse the system to improve immunity and strength, following which treatment for the tumour will commence.
A few years ago, the Journal of American Medical Association published a report stating 20-30% of Ayurvedic products are toxic that go untested. “I haven’t come across any such product because the medicines I use are certified organic by a Swiss company. However, in the real world, due to the pressures of competition and profit motives, some companies do have a tendency to invest in short-term success without giving any thought to the negative effects it can have on a person’s health. It’s sad and dangerous,” asserted Peter.
Moving on to Kalaripayuttu, Peter says that he is not an expert yet in this form of martial art, but he is an accomplished novice. “When my Guru suggested that I learn this art form I was taken aback, but nevertheless decided to give it a go. It helps in self-defence apart from maintaining a sharp mind and body,” he says.
Peter currently teaches children Kalaripayuttu at the healing centre every Saturday and considers this an honour. His advice on living a healthy life in these mystifying times is enlightening: “Know yourself – observe your habits, both mentally and physically. We should control our lives rather than let life control us. We must be open to change and never stop learning,” he says.
Being a regular visitor to Kerala, Peter is mesmerised by the simplicity and charm of the people there. He adds, “People there are content, have a simple outlook on life and that’s priceless!”
PULLQUOTE: Ayurveda is preventative and in the case of a severe illness, it helps restore balance between mind, body and spirit, which in turn helps eradicate the root cause of the disease