A (Modi) rose by any other name 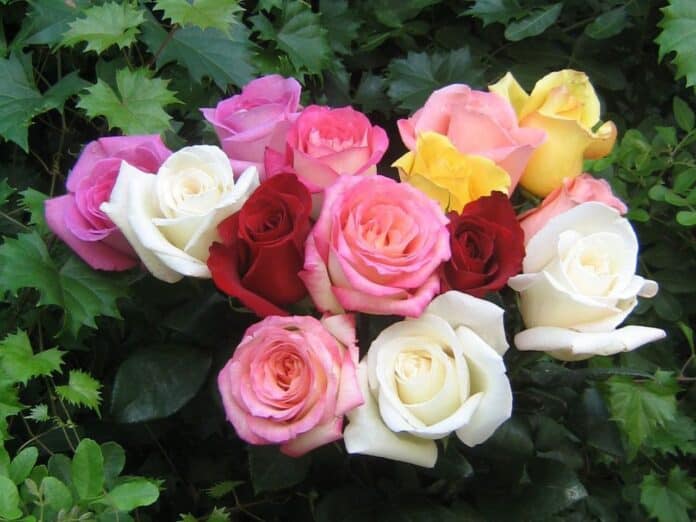 The rose named “Saffron-Vermillion Red with Yellow River” has German parentage and has been carefully developed after nearly five years of research and development at the world famous KSG Roses, Bangalore.

Vinod Tawde, Leader of Opposition in the Maharashtra Legislative Council, and legislator Ravindra Chavan formally inaugurated the ‘Modi Rose’ at the DRS rose garden on 13 August.

As soon as the curtain was lifted off the ‘Modi Rose’, displayed on a special platform, a huge crowd of rose lovers and guests cheered and clapped to welcome the latest entry into the country’s rose family.

It will take at least another two years for the ‘Modi Rose’ to be commercially available in the markets, the organisers said.

This is one of the rare instances in the country when a rose – the universal symbol of love – has been named after a top politician.

In the past, special rose varieties have been named after prime minister Jawaharlal Nehru, President S. Radhakrishnan and Netaji Subhash Chandra Bose.

Some decades ago, late prime minister Indira Gandhi had a special rose dedicated to her – Pink with White River – and called ‘Indira Priyadarshini’.

KSG Roses managing director Sriram K. Rangan said that usually they do not part with their global exclusive creations, but since the DRS wanted to immortalise it by naming it after the prime minister, they agreed.

“This year, we developed over two dozen new varieties, of which the ‘Modi Rose’ turned out to be the best and healthiest,” Rangan told IANS from his nursery in Bangalore.

After tending to it dedicatedly, with considerable research and efforts over the past five years, the new rose became ready earlier this year when Modi was still campaigning for the Lok Sabha elections.

The company’s 84-year-old chairman, Kasturi Rangan, said there are presently around 4,000 varieties of roses, authentically documented and catalogued.

Referring to the roses named after VIPs, he said there are a variety of protocols to be followed before a rose can be dedicated to any dignitary – the most important being his or her consent.

Confirming that Modi has given his consent, a pleased Ravindra Chavan, DRS patron and Bharatiya Janata Party (BJP) legislator, said that when they saw this particular rose at the KSG Roses nursery they fell in love with it.

“It is of a medium size, but appears unique and stands out among others, emits a soothing and sweet fragrance. We requested Kasturi Rangan to allow us to dedicate it after the prime minister,” Chavan told IANS.

According to Chavan, they toured around the entire country to acquire the best and unique rose saplings for the DRS before they finally went to KSG Roses and settled for the varieties there.

It was a sea of beautiful roses of different shapes, sizes, colours; single, dual or multi-coloured, each with a unique fragrance and texture.

Rangan said developing and selling roses was a huge business in the country with Maharashtra’s Pune city alone accounting for over 10 million saplings annually, followed by West Bengal with 7.5 million and Karnataka with 1.5 million through some 60-odd nurseries around the country.

“The sad part is that most customers still insist on imported varieties of roses, though the Indian varieties are among the best available in the world,” rued Rangan, who heads the 100-year-old company.

KSG Roses supplies the flower to some of the top government bodies, residences of governors and chief ministers, ex-royalty, top corporate houses and private individuals and rose lovers around the country for their unique gardens or nurseries.

The country’s single largest collection of 2,500 rose varieties can be found at the famed Ooty Rose Garden.

Legendary horticulturist and rose master M.S. Viraraghavan lives in Kodaikanal and his creations are globally patented and adorn the homes of the rich and powerful worldwide, Rangan said.