A Melbourne kahani for Shahid and Priyanka 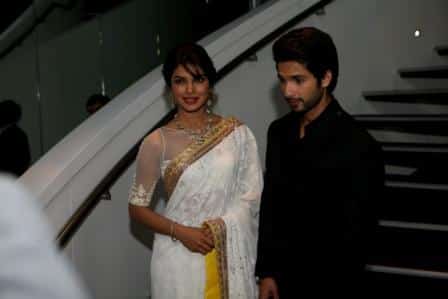 It was hugs and sunshine for the fans that managed to get up, close and a tad proprietorial with Bollywood A-listers Shahid Kapoor and Priyanka Chopra at the opening night of the Indian Film Festival of Melbourne 2012 recently.

The star-studded diversion during a dreary Melbourne winter was a great way to wrap up the long weekend.

Every year since 2009, the IFF, under the aegis of Mind Blowing Films, brings its edgy brand of Bollywood glamour to Melbourne, and showcases dozens of innovative, independent films. On offer this year were over 40 affordable films from India, Nepal, Bangladesh, Pakistan and Sri Lanka, making the festival a multicultural delight.

‘Delight’ was an understatement for fans who went wild, screaming and fawning their pleasure when hunky Shahid and hot Priyanka took centrestage to inaugurate the IFF at Hoyts Melbourne Central. The Q&A was completely taken over by proclamations of love and adulation for the two popular stars.

In between the delirious demands for hugs, some people did manage to ask questions on DVD piracy, Shahid’s bachelor status and how the stars cope with failure. Priyanka’s diet or lack thereof came to the fore with Shahid taking great pleasure in counting all the things Priyanka had already eaten that day. “She loves food and eats everything including burgers and fries so follow Priyanka’s diet at your own risk,” he stated cheekily. Wonder where all that food went because there was not an ounce out of place in the actress’s perfectly toned body, as she sparkled in a white Manish Malhotra saree.

Priyanka and Shahid have previously been linked together as a couple; however according to recent reports they are no longer an item. When a fan asked whether they were having an affair, Priyanka clarified that they are “neighbours, co-actors and friends, and the rest no one needs to know!” The chemistry between the two was interesting to watch as it waxed and waned under public scrutiny at the opening event, as well as the press conference and the myriad interviews that were conducted with them that afternoon.

There was an element of comfort in their current relationship as Shahid made several teasing remarks aimed at Priyanka, and she seemed to take them with good humour. On popular demand, the jodi also danced together to hits Mukhtasar and Jabse mere dil ko uff from their latest film release Teri Meri Kahani.

The actors were accompanied by writer/director Kunal Kohli and producer/director Vicky Bahri. They were here to promote the release of their epic time-hopping romance Teri Meri Kahani in cinemas in Melbourne on June 20 and worldwide on June 22.

“We are all excited about the release of this film. It was a lot of effort to span three different eras during the movie but that’s what makes it unique, the concept of soulmates who meet and fall in love over three eras,”

said Kunal. “It is a light-hearted movie and our favourite era is 1910. We hark back to pre-independence period but it’s not all about British rule and patriotism; it is about how people fell in love and led ordinary lives in extraordinary times”.

Also present at the opening were acclaimed designer Sabyasachi Mukherjee and award-winning director Jugal Hansraj, who will be conducting master classes during the festival.

Victorian Premier Ted Baillieu was chief guest at the opening night, accompanied by his wife Robyn. The Consul General of India in Melbourne Dr.

Shubhakanta Behera was also present, with his wife Rajashree. The Hoyts Melbourne Central Theatre was packed to capacity; however it was clearly the stars that attracted the crowd as many of them left after the session with celebrities. Premier Baillieu and his wife stayed back to watch the opening night special Kahani, a wonderfully executed movie featuring Festival Ambassador Vidya Balan.

The award-winning entries for the Western Union Short Film Competition were also presented before the movie. In her introductory speech, Festival Director Mitu Bhowmick said, “The judging panel of this year’s competition comprised of renowned film-makers and producers like Raj Kumar Hirani, Mick Molloy, Kabir Khan and Kunal Kohli. It was difficult for them to pick a winner amongst the brilliant work that was seen at this competition. The theme of ‘Connections’ was wonderfully explored by all the entrants.”

The star among stars at the glittery opening night was clearly the very youthful, very lovable, very effortless Shahid Kapoor. Add to that very charming, and you get the complete alpha male who flirted unabashedly with the audience. The ‘darlings’ were delirious to see their favourite and they all wanted to hug him. Kunal Kohli had to intervene and save Shahid from having to hug the shrieking youngsters collectively. Buoyed by the success of IIFA awards that he hosted recently in Singapore, Shahid had a humorous comeback for every question posed to him, whether it was good, bad or dumb.

He was also game to dance with the Shiamak Indo Jazz Movement dancers who were invited back on stage so that Shahid could shake hands with each of them. Prior to joining the film industry, Shahid was an instructor for the Shiamak Davar Group, and he claimed that the Shiamak dances were ‘very special’ for him.

In true Indian style the Film Festival 2012 opened with colour and vivacity and surely this feast of diversity will continue till it concludes on June 22.