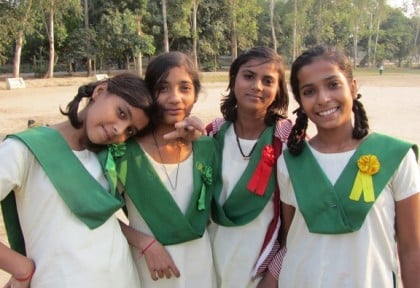 There is an old proverb, “Indian girls leave home only twice during their lives – once when they marry, once when they die.” It’s still applicable to many of girls living in rural villages, whilst young women elsewhere in India are taking full advantage of careers in India’s tech revolution.
Imogen, Freya and their mother Erika Wadlow have long been passionate advocates for science, education and equity for women. The Australian women were excited to put all three together and begin Skype lessons with students at the Pardada Pardadi Girls School to talk science.

The school, located in Uttar Pradesh, educates girls from some of the poorest rural villages in India.
From the moment local businessman Rajiv Chaudhri told Erika Wadlow about the school, she wanted to help the girls access some of the opportunities in the emerging Indian economy. Prime Minister Modi recently announced an increase of 16% in funding to science and research in India and is creating 20 additional world-class institutions for scientific research and teaching.
“This is the perfect time for these girls to be getting motivated about science,” said Erika. “Especially as there’s the very real opportunity of jobs in this area for them.”
The school was founded by Sam Singh, a former head of Dupont, who on revisiting his home village, knew he could not rest until he had changed the massive gender disparity in the area. Setting up the school was easy; getting local families to release their daughters from chores to attend was much harder. The school purchased bikes so the girls could get there and even purchased machines to manufacture sanitary towels as part of the school’s ‘Rags to Pads’ program, as the girls could not attend school for one week each month because they were not able to afford sanitary towels. Little by little the school is breaking down barriers to educating local girls. They even raised funds to supply solar lamps to the girls so they could do their homework and chores after dark as the region has no reliable power supply.

The first Skype session with the school was also not without difficulties. A Hindi-speaking friend set to translate the content pulled out at the last minute, leaving the trio wondering how they would communicate with the students. Enter Shubha Kumar, President of the India Club, who quickly put her contacts to good use. Soon local resident Sarjita Dev stepped in to save the day.
On the morning of the session, there were technical hitches galore, but eventually and with much patience from the excited class of Year 11 girls, everything finally worked. “There is no way we could have done it without Sarjita,” said Imogen. Sarjita proved to be not only an efficient translator, but also added her own sparkle of enthusiasm and humour to the scientific explanations.
“We talked to the girls about how scientists need to be curious and experimentation is all about learning from failures,” said Freya. “Our whole Skype session with the school was one big experiment, but we learnt so much from it.”
The plan now is to continue the relationship with the school. The girls at Pardada Pardadi School have made an email account which they will use to communicate with the Wadlows, who also run their own science website. Imogen and Freya will produce short video clips explaining some of the trickier science concepts which they hope will increase the students’ skill level and keep them interested in science. The trio will also be feeding the students interesting science and environment news as well as a healthy dose of girl power.

Imogen and Freya themselves are high achievers; both are studying triple majors at Macquarie University in the fields of Science and Politics, they set up the Macquarie University Symphony Orchestra and hold the two positions as Student Representatives for the Faculty of Engineering and Science. Meanwhile, mum Erika is about to take on a PhD studying the sustainability policies of India’s Smart Cities. Together, they have run websites which help engage kids with science and the environment for many years and have won two WWF Earth Hour Awards, the News.com ‘Green’ award, as well as winning the European Science Foundation competition.
Erika believes it’s incredibly important for girls in Indian villages to have role models and mentors to develop their skills. “Imogen and Freya were lucky as I am an educated women and believe in the empowerment of women,” Erika said. “I was able to encourage them to just follow their passions, but the girls in Uttar Pradesh don’t have that, their parents are unskilled and uneducated through circumstance. So we hope our mentorship might be a small, but effective catalyst of change for this small group of girls.”
Freya said the trio have even bigger plans for the future. “If it’s a success, we can replicate this program to village schools around India, and perhaps even further,” she said.
The Wadlows would love to hear from fellow scientists who could help make short science video lessons for the students in India as well as young Hindi speakers with a science background. Contact them via their website: www.i-fink.com