The 26th Indian Mela: A flavour of everything desi

The idea is to get people, including those of Indian origin and the general Australian public, to savour anything and everything Indian. 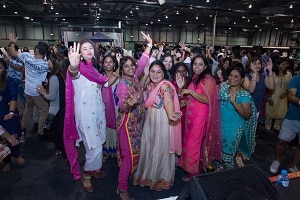 Reading Time: 3 minutesIt was a perfect day for a family outing at the Adelaide Showgrounds. The 26th Indian Mela by the Indian Australian Association of South Australia (IAASA) is one of the most exciting events of the year for Adelaide’s Indian Community, and for a good reason.


The fete is held every year in March-April and is a hit with children and adults alike. The idea is to get people, including those of Indian origin and the general Australian public, to savour anything and everything Indian.
The indoor event began at 11am with people streaming in and posing for photos with a fun cardboard cut-out in the shape of a traditional Indian dress: definitely a popular point. For those who wanted to shake a leg (or enjoy the performance from the sidelines!) there was an interactive Garba workshop to take part in. Live performances by the bands Kalalaya and Talash bands definitely added zing to the atmosphere, and not to forget DJ Vivek, who played blockbusters late into the night and had everyone dancing away.

And while the grown-ups were caught up in their own fun, the kids enjoyed rides, games and a multitude of craft activities such as origami and thread painting in the Kids’ Korner. Did we mention there were stilt walkers and other circus entertainers too?
The Footy Clinic by SANFL was another hot favourite as was the Cricket Clinic by SACA. Kids and adults had a great time playing and learning the ropes of Aussie Rules till late in the day. Culture was a high point of the day, with activities like Maharashtrian lezim dancing and drumming and an interactive flash mob by a group of some very talented women who were eventually joined by onlookers, definitely fun to watch!
For those who’d had enough of the playing and running about, there were plenty of food stalls with delish food to gorge on. After all, what’s a mela without good food? Apart from the usual hits like butter chicken and biryani, there was a great variety of Indian street food. We must give a special mention to Auntie Odella of Odella Paneli’s stall of tea and coffee who’s been setting up a stall at every Mel for the last 20 years and who donates all the proceeds to IAASA.

The formal part of the evening kickstared at 6pm with VIPs entering to the beats of huge dhols by Shivgarjana. Guests included the Governor General of South Australia, His Excellency Hieu Van Le, the then Premier Jay Weatherill, then Leader of Opposition and current Premier Stephen Marshall and other dignitaries. The Governor General, in a lovely gesture, began his speech with a line in Hindi.
In a nutshell, the event was fantastic, especially due to the interactive performances and workshops. And although the turnout could admittedly have been better, IAASA President Narayana Rai says he is grateful to the community for their support. “The volunteers, performers, stall holders and everyone involved put in a lot of effort. I would like to thank all of them and also everyone who came and made it a fantastic event. Thank you! Hope to see more of you at the Mela next year!”
- Advertisement -
Share
WhatsApp
Facebook
Twitter
Linkedin
Previous articleA song and dance about Kerala
Next articlePay parity a distant dream?