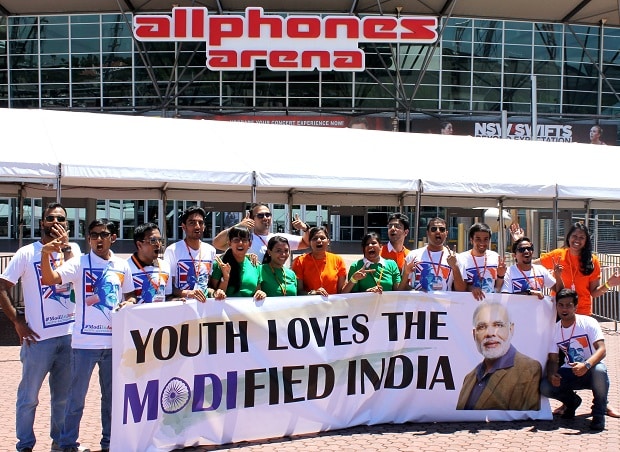 Modi! Modi! Modi! The chanting did not stop. Olympic Park was transformed into an Indian mela and the energy was palpable. Thousands of Indian Australians travelled long distances from all over the country to hear and see the man who has taken the world by storm. With his brilliant oratory skills, charm, wit and passion, Modi aims to bring about change for the common man.

Despite being a working day, nobody wanted to miss this historic moment. “It has taken 28 years for an Indian Prime Minister to come to Australia,” said 32- year-old Ravi Kabra, originally from Hyderabad, who attended the event with 15 other family members. “Modi is not a politician, but a hero for India. I even took a day off from work to come today.”

The overwhelming support and response from the youth for the event was the first of its kind for any Indian leader. What is it about Narendra Modi that drives young people into this frenzy?

Labdhi Mehta, 20, decided to celebrate her birthday by coming to the event. “I personally believe in Modi’s policies and economic outlook on India. He was born to be a leader and under his leadership I truly feel India will shine,” said Mehta, who is studying Medicine in Queensland and had specially flown down for the event.

Aneri Upadhyay, a law student in Sydney, hails from Gujarat. She was 11 when she came to Australia. “Modi is a brilliant storyteller and has a captivating voice,” said Upadhyay. “Our family discussions have always centred on Indian politics, even though we don’t live India. We all watched the recent general elections in India and were thrilled with the result.”

The scorching heat did not deter the enthusiasm and excitement of people who were lining up for last minute tickets to enter the stadium. Modi t-shirts were selling like hot cakes. With food stalls, tri-coloured flags and banners, painted faces, patriotic music, cultural dances – it was a celebration like no other.

The rock-star reception for Modi got even louder inside the stadium. When Prime Minister Modi finally did walk on stage, the thumping applause and cheers continued. His mesmerising speech left many young people emotional and in complete awe.

Aditi Punjawat, a young mother who came with her six-month-old daughter, felt inspired and was left teary-eyed. “I felt he doesn’t just talk the talk but walks the walk,” she said. “Modi spoke about how he wants to bring dignity of labour in India like there is in Australia. When that happens, India will be a step ahead of other developing countries.”

Indian-Malaysian Kalppana Maran, is an 18-year-old who volunteered at the event. “It was Modi’s keen eye for democracy that captured my fascination, as well as his inherent determination for defying to take “no” for an answer,” she said. “His anecdotal example of opening 71 million bank accounts in 10 weeks reflects his passion for equality among disadvantaged citizens of India and definitely instilled feelings of inspiration amongst the entire crowd.”

There were also many who could not attend the reception ceremony inside the arena as registrations closed early, but have been following Modi and his policies and watched and listened to his speech.

Sumir Diwan, who came to Sydney to complete his masters from UTS, didn’t have much interest in Indian politics until Modi took centre stage. “I recall my late father-in-law predicting 10 years ago that Narendra Modi would be Prime Minister of India some day. I know he would be smiling down on us today,” Diwan said. “The passion and the belief to bring about change is what Modi is currently doing and inspiring the world over. When he talks the world listens.”

There is also a new wave of hope among many Indian-origin Australians. “I think Modi has brought a new hope for all Indians in India and abroad,” said Sid Bhatnagar, a project manager for a ‘big four’ bank in Melbourne. “Modi comes across as down to earth and empathetic towards the common man – traits missing from his predecessors and usually missing from Indian politics altogether. He seems to be quite popular around the world as well. I only see positives coming out of his leadership.”

Some, however, are also cautiously concerned about the Modi-mania that has gripped both India and Australia, where the individual has been given a God-like status.

Saurabh Marwah, a financial services consultant from Melbourne feels slightly bewildered by the excitement and enthusiasm shown towards Modi’s election victory. “I think the overall energy produced has been positive for India. I like the way Modi has tried to place responsibility back on the individual, be it a politician through his ‘crackdown’ on corruption, or a member of the greater public through his grass roots approach to change,” he said. “I am concerned, however by the God-like status bestowed upon Modi by Indians in India and abroad, his polarising association with the RSS and the widespread use of rhetoric in general discourse with fellow Indians.”

For now only time will tell how well Modi performs, but one thing is for sure, Australian Indians have been abuzz with Modi in town and are clinging to his every word. May the force be with him.