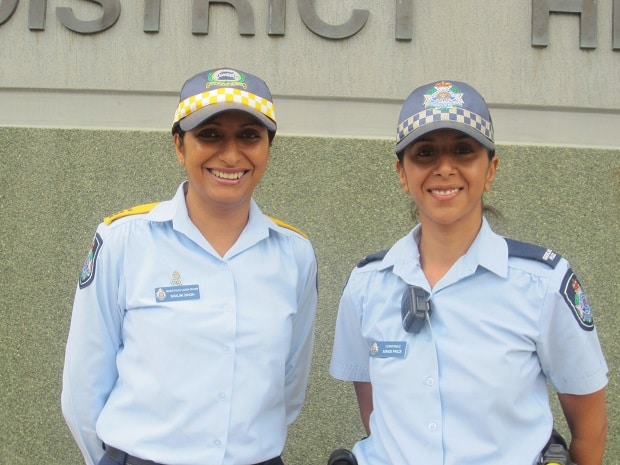 
It is a male dominated field, perceived as dangerous and violent; which is why not many Indian women opt for a career in the police. To understand and delve more into the lives of women police officers, I caught up with two Indian origin women working within the Queensland Police Service to get an insight into the profession through their eyes.
“After our house got burgled in the UK and seeing the efficient manner in which the police helped us through this crisis, I made up my mind at the age of 12 that I would take on a career which involved helping people in times of distress. Joining the police service was my first option,” says UK-born Constable Mansi Price.
In 2003, Constable Price joined the London Police, attending to a diverse community. Hailing from a Sikh-Punjabi background was an advantage, as the Indian community developed faith and trust in her, not the least for her ability to communicate in both, the Punjabi and Hindi dialects. Constable Price is currently the General Duty Officer for Logan District in Queensland, having joined the South Australian Police Service in 2007.
Shalini Singh started her career with the Queensland Police Service as a Volunteer in Policing (VIP), which eventually led her to apply for the position of Police Liaison Officer in 2009. She presently holds the position of a Senior Police Liaison Officer for Logan District in Queensland.
“The first response of people from culturally and linguistically diverse backgrounds is often to steer away when there are police officers around; this can be based on a very different view of police officers from their home countries,” she says with a smile. “My obligation as a liaison officer is to speak the language of the people, to hear them and guide them to the right people. So far the journey has been good, people have been welcoming irrespective of their cultural backgrounds,” states PLO Singh.


All in a day’s work
“Everyday is a new day at work, you don’t know what you can get. Members of the Queensland Police Service are required to respond to a wide variety of incidents,” admits Singh. Her role as a Police Liaison Officer is to mediate between culturally specific communities and the police, to foster cooperation and understanding. “As a Liaison Officer, I have the opportunity to liaise with members of the diverse local community; in doing this I improve community access to policing services and can also assist by organising referrals to necessary services,” she explains.

Working erratic eight hours shifts as a General Duty Officer, Constable Price says, “I have been nervous about certain jobs; you see things you don’t want to, sometimes a dead body or a suicide. We all have hearts and seeing all this makes us want to cry. But with a good support network and people around you to make sure you are okay, it is reassuring”. So can women in particular, opt out of a certain job if they are not comfortable doing it? “There is no disparity among men and women, they are treated equally and are on par,” states Constable Price.
And what preparations are made before going out on patrol? “We always make an assessment of what we are going into, what is the address, do we know the history of the person/locality,” explains Constable Price. “However, at the end of the day, we don’t take things (work) home”.
Inspector Owen Hortz from Logan District responded positively when asked if Indian origin women officers were an asset to the Queensland Police Services.
“Multicultural officers are immensely important to Australian society. Having moved to Australia from a different country they not only speak the language of their community, but can also interact in the English language. In the workplace these officers are approachable and easy-going and provide a valuable link to a culturally divers community,” he says.

Community communication
“The Indian community is definitely receptive when spoken to in their local dialect, but with other immigrant groups they are sometimes difficult to deal with,” says PLO Singh. She further explains how some people are hesitant to discuss their issues or problems with an Indian origin officer in comparison to an Australian officer. On the other hand sometimes they are overwhelmed with appreciation to have one of their own to discuss their issues personally.

Archana Singh, Honorary India Consul for Queensland lauds the work done by Indian-origin women police officers. “It is important for women of Indian origin to feel comfortable with sharing their concerns and their issues without feeling judged or scared,” she says. “It is always helpful if someone can understand your cultural beliefs and traditions without having to explain things. The police are not only ensuring peace and security for society, they are also doing invaluable work with victims of domestic violence, crime and mental illness, among other issues,” she adds.

What will the family think?
PLO Singh laughs when she recalls her parents reacting to her career choice. “My family said, ‘can’t you find another job, you’ll be working and be surrounded by men.’ They were proud that I was the first one from the family (in this profession) but were anxious for me at the same time,” she says.
“My parents were definitely happy and proud, but also forewarned me that it was a dangerous job and I had to be cautious,” says Constable Price.

More than just a job
“I love and take a lot of pride in my uniform,” says PLO Singh. “This job is a constant learning curve, it is satisfying and gratifying and you are helping and assisting people through this profession”. Constable Price echoes similar thoughts. “The job is fun, challenging, interesting, and spontaneous, you are constantly learning new and different things everyday,” she says. “This is a well respected job and every day you are making a difference to society”.