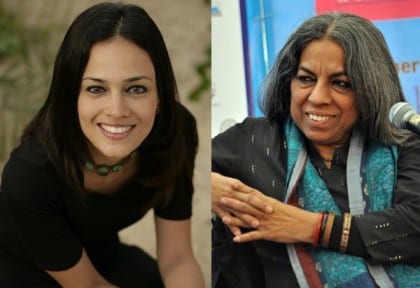 In a deeply patriarchal society, where women’s bodies, strictly controlled, are the altars at which choice, freedom and self are sacrificed, some women have shaken off the chains of oppression and broken free from narrow expectations to help other women make ever greater strides towards dignity, respect and opportunity. At the recent Melbourne Writer’s Festival, Urvashi Butalia and Tishani Doshi spoke about the women who helped them shape their lives at a session called ‘Women helping women’.


In town to promote Walking Towards Ourselves: Indian Women Tell Their Stories, Butalia and Doshi spoke with Catriona Mitchell, who edited the anthology. Butalia talked of how her mother supported her and her siblings’ unusual choices and let them take risks; in her case, her decision to join a publishing company and put off marriage. She co-founded India’s first exclusively feminist publisher, Kali for Women, later founded Zubaan Books and was awarded the Padma Shri in 2011. Butalia’s mother played a pivotal role not only when she was a child, but also as an adult, when they both fought together against the practice of dowry and for women’s rights.
An award-winning poet, writer and dancer, Tishani Doshi’s early adulthood was influenced by dancer Chandralekha. Controversial, rebellious and highly political, Chandralekha’s dance form replaced devotional forms with earthy and erotic ones. As a young adult, Doshi spent hours on a daily basis with Chandralekha, and was struck by the choices she made to remain both unmarried and childless.

Both Doshi and Butalia questioned the status quo when they were quite young.
“I became a feminist unconsciously as a child,” laughed Doshi, telling us how in her grandfather’s house, the men ate first, then the boys, and the women and girls ate last. “I’m always hungry, so I used to eat with the men, first, while my girl cousins were in the kitchen,” she remarked. “I never helped, or even wanted to help,” she quipped, “which is why I’m learning to cook at such a late stage in life!”
Butalia’s first experience with rebellion came via her mother. Her mother and grandmother didn’t get along. “My grandmother expected that a wife would replace a maid and provide sexual services to the man. My mother wasn’t having any of that!” she laughed.

The girls, like in Doshi’s family, were discriminated against when it came to food, so Butalia’s mother taught her how to steal the keys to the trunk that contained food, from the grandmother while she was sleeping. “Don’t take this old woman’s oppression,” her mother instructed. “Be nice to her, but find your own way to subvert her plans.”
As an adult, Butalia and her mother went on to work with women affected by violence. At one point they had a small theatre group, and eventually her mother set up a group to help women who suffered violence. Eventually they went their separate ways career wise, but remained close till Butalia’a mother died a few years ago.
Contrary to society’s view of the plight of a single woman, Chandralekha’s life, and her death, showed how engagement with people is not predicated on marital status. “There were always people in her house,” said Doshi. “And when she died so many people talked of how she changed their lives.”

Doshi and Butalia were both championed by women from a different era. Their choices were limited, yet they saw a different future for the next generation. Straying from narrow paths, they forged others that helped them and others discover new identities. These paths led them not away, but closer to themselves. Apt then are Chandralekha’s words, ones that inspired the title of this anthology: “We are walking towards ourselves.”
- Advertisement -
Share
WhatsApp
Facebook
Twitter
Linkedin
Previous articleAir India to fly 10 flights a week between India and Oz
Next articleShoulder to shoulder