Swearing by the Gita 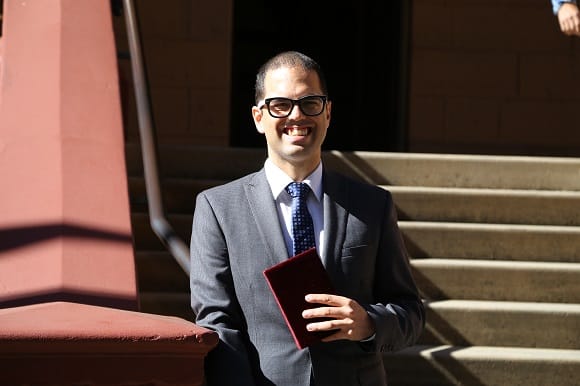 Daniel Mookhey, the first ever Indian origin Australian to be selected for NSW Parliament, launched his political career on Wednesday with his inaugural address to the NSW Legislative Assembly.
Mookhey began with a bold statement, echoing the word of the Governor of New South Wales who opened the fifty-sixth session of parliament with a reminder of the responsibilities parliamentarians hold.
“I intend to always act with integrity. I hope to develop wisdom. As for courage, well let me initiate my parliamentary career with a courageous declaration – courageous in the Yes Minister sense,” Mookhey said, alluding to the satirical British sitcom about an apparently clueless British government minister and his long-suffering advisors.
“I inform all 41of my fellow members of the Legislative Council that they should rest easyas I am already striving for our collective unemployment,” Mookhey continued.
“If I should ever have the chance to affirm the principle that the will of the people is expressed totally in the other place,if the chance arises to implement the Labor platform and if I can vote for our abolition, know this:I will.”
Mookhey continued by telling the story of his maternal grandfather, a lifelong soldier who in the second world war was left stranded alone in the North African desert after a German ambush. Mookhey’s grandfather experience visions of a monkey, Lord Hanuman, the Hindu Monkey God.
“For the rest of his life he would starts each day by reciting the 40 verses of the Hanuman Chalisa, a hymn that tells Lord Hanuman’s story, one of the most important hymns in Hinduism.”
It was in honour of his grandfather that Mookhey took his pledge of loyalty holding a copy of the Chalisa and the Bhagavad Gita, he explained.
It was also through his grandfather that Mookhey’s family first had experience with Australians as his grandfather recuperated, after being rescued, alongside the Rats of Tobruk.
“I am certain the Rats of Tobruk are the reason why grandad could forgive me the trespass of loudly cheering on Craig McDermott as he destroyed Srikkanth and the entire Indian top order in the 1991 World Series,” he joked.
Mookhey detailed how his parents moved to Australia in 1975; how he grew up in Sydney’s western suburbs and the community rallied around his family when his father passed away when Mookey was just five.
Mookhey told of how he is inspired by India’s great leaders, Patel and Nehru, Jinnah and Gandhi, as “the creation of a social State, and the march towards colour-blind society, are the best examples of change that could be wrought through a political life, of the scale of social transformation that is possible when politics is used for good”.
Mookhey then went on to thank various union leaders, volunteers and political allies for their assistance in him securing this position, as well as thanking the Sub-Continental Friends of Labor organisation.

“For those who are the labour movement’s stewards, like me, there is a high degree of appreciation for the reason why political and industrial labour are the two wings of our great movement, why they have an entwined history and a joint fate. This is because both are devoted to working people’s freedom, and freedom is the enduring mission of the Labor movement,” Mookhey said, not shying away from his industrial union movement background.
It was not a time for much discussion of policy, though Mookhey did point to the environment, transport and housing as key priority areas for his constituents.
On a personal note, Mookhey thanked his extended family, his mother and his wife ending his inaugural speech to the chamber by emphasising the importance of jobs and business to the community.


“I am honoured to have that chance and I am eager to get started,” he concluded.
Earlier in the week Mookhey made history as the first person to be sworn in to the NSW Legislative Assembly, the upper house of State parliament, using the Hindu sacred text, the Bhaghavad Gita.
Daniel Mookhey was selected by the Australian Labor Party to replace veteran politician Steve Whan after his resignation ahead of the State election.
- Advertisement -
Share
WhatsApp
Facebook
Twitter
Linkedin
Previous articleIndian Link’s Top 5 Free Events at Sydney Writers’ Festival
Next articleSupporting the Salvos