Why we chose Brisbane 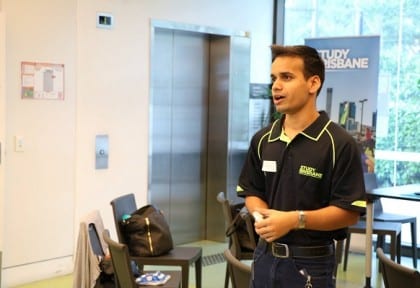 Two students from India are picked as International Student Ambassadors for this year. HARSHITA SRINIVAS reports

Lord Mayor Graham Quirk recently welcomed 40 new Brisbane International Student Ambassadors, who will take on the responsibility of promoting Brisbane as an education destination.
This year, the ambassadors include Goutham Narayanan Subramanian from Chennai and Partha Narayan Mishra from Bhubaneswar, both doing their PhD at the University of Queensland.

Coming from vastly different areas in India, both ambassadors were recipients of a fully funded education at UQ. Partha received the International Post Graduate Research Scholarship (IPRS), provided by the Australian Government, while Goutham fully funded by QIMR Berghofer Medical Research Institute as part of their ASIA SHORT TERM Fellowship. Under this scheme, neither had to worry about tuition fees, living expenses or even health insurance.
Goutham is a well-travelled student who started his education in India, finished his Masters in Scotland, and is now pursuing a PhD in Biomedical Sciences. But he knew no one in Brisbane when he decided to travel here by himself.

Talking to Indian Link, Goutham said, “I had been following life sciences and medical sciences research coming out of Australia, it is quite in the forefront on both. And when I arrived in Brisbane, I knew I couldn’t have picked better. So many people boasted about Brisbane being the best place in Australia.”
And right they were! The perfect weather, lovely beaches and the food scene in Brisbane were only a few things that Goutham could not stop raving about.
As someone interested in giving back to academia, he wants to continue research and eventually pass on the knowledge in the form of lecturing in the tertiary education industry. Goutham said, “I hope to do my best here, and contribute to my specific niche of science, that being Developmental biology.” As for how long he sees himself in Brisbane, Goutham responded with the quick wit he’s known for, “As long as Brisbane doesn’t kick me out!”
Brisbane Marketing’s Study Brisbane Program has a highly selective process that picks 40 special students from over 30 different countries with an aim to spread the word about what Brisbane has to offer in terms of education. Other student Ambassadors hail from countries with strong trade ties to Australia such as China, Hong Kong and South Korea.
The opportunities they gain through their year-long position include translation opportunities, event promotion for film festivals, sport promotion through media coverage of games at the Gabba and much more. Previous ambassadors from the program have benefitted from the connections, having acquired part time jobs (and careers!) from the various people they’ve met through their ambassadorship.

Partha claims he felt a massive culture shock when he first came here, but it took him just one week to make new friends. “I wanted to break the stereotype of a post graduate student stuck in the office,” he said. “When I saw the opportunity of international ambassador, I thought it was great and I applied.”
Partha added that he is now a student leader on campus in his role as the Vice President of UQU Association of Postgraduate Students (APS), taking care of over 40,000 post graduate students. He often goes out with friends and enjoys the city’s bustling nightlife, and is an avid team player of UQ’s cricket team.
What do they love about the city they now call home?
Partha said he loved taking the city cat at night, a happy accident stemming from all his late nights working in the office on his PhD. Goutham shared the love of calmness with his favourite spot being Southbank, citing the ‘beautiful river views and parklands.’
And how would they advise future applicants for the Study Brisbane Program?
“It’s about perseverance,” Partha said. “If one door is closed, there is definitely another that will open up.”
Goutham also shared similar sentiments and expressed a need to be open minded about cultural diversity and base your interactions on mutual respect. A mutual feeling of considering their ambassadors as extended family was apparent in the way they interact with them, hanging out often together sharing drinks and movie stubs on their respective social media.
With such talent as these two upcoming Indians choosing Brisbane over bigger cities in Australia, Brisbane is carving out a space for itself as a premier education hub, for its affordability, perfect weather and multiculturalism.