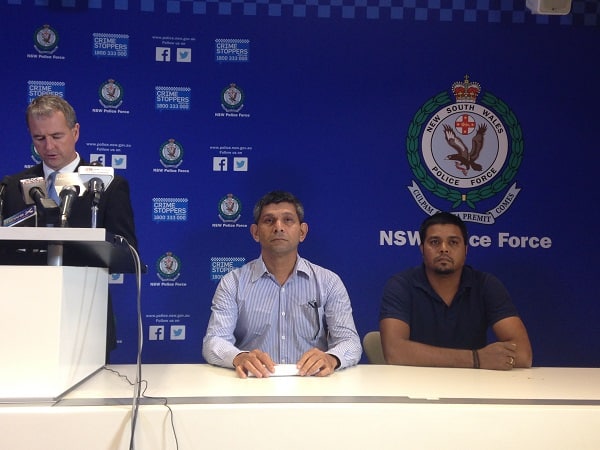 Prabha Arun Kumar, an Indian national who was in Australia working for IT company MindTree, was speaking to her husband in India on her mobile phone when she was attacked.
The 41-year-old mother of nine-year-old Meghana was treated at the scene for stab wounds to the neck but later died at Westmead Hospital.
At a media conference on Thursday morning, her husband Arun Kumar and brother Shankar Shetty, pleaded for the public to help the police find her killer.

“I am a husband who has lost his wife and a father of a young girl who has lost her beloved mother,” Arun Kumar told the assembled media. “I cannot describe to you the pain I feel.”

He said his wife, who had a “caring and beautiful soul”, had been planning to buy a toy penguin to send home to their daughter in India, and now will never have the chance.
“I know that we can’t bring her back, but I want whoever killed my gorgeous wife to be brought to justice,” Kumar said.
“If you have any information that can help police, please, please contact Crime Stoppers.”

Prabha Kumar’s brother Shankar Shetty said he was still coming to terms with the fact he had lost his much-loved sister.
“The pain that I have felt is unimaginable,” he said. “No one deserves to have any (member) of their family taken away from them in these horrible circumstances.”
“I say this to the person who did this, you have taken my sister’s life, please step forward, get help and get your life back.”

Detective Superintendent Mick Willing said the specialist strikeforce Marcoala setup to investigate Prabha Arun Kumar’s death is still no closer to determining any possible motives or identifying anyone who may have been following her.
He confirmed police have gathered a large amount of CCTV footage and interviewed a number of witnesses. He said they are keeping an open mind but they had no information to suggest the attack was racially motivated and no evidence of sexual assault.

“The Indian community are working very closely with the NSW Police force regarding this matter,” Detective Superintendent Willing said. “The Local Area Command is out talking with them and last night there was a vigil for Prabha and police had a presence there. It just shows how deeply this crime has impacted, not just the Indian community but the entire community as a whole. ”
He reiterated a need for all members of the community to come forward and assist police in solving this crime.
“It is a mystery. But what I can say is we are determined to get to the bottom of this crime,” he said.
“We have detectives working around the clock on it,” Detective Superintendent Willing said. “I’m confident that we will have a breakthrough as soon as we can get information we need.”

He confirmed Prabha’s husband has been of great assistance to police and gave a lengthy interview describing his phone call with his wife.
Prabha Arun Kumar’s body was released on Wednesday afternoon and police confirmed arrangements are being made by her family to bring her body home to India.