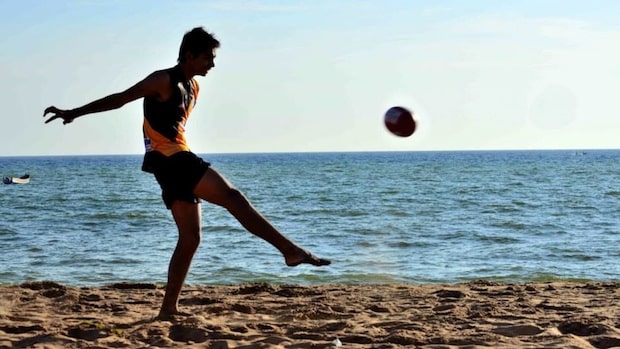 AFL India Jersey: #4
One might call him Mr Congeniality of Team India, because he is universally liked, and because he has been a standout since he began in AFL. It is not his talent but his motivation in his heart for the game that makes him a stand out. He is proof that it is not our physical strength that moves us but it is our desire. And he has used this heart of his time and time again in his life, and what he has done in doing so, is give himself opportunity and the possibility of a unique life.

Someone may look at Mayur Parmar’s life, and see where he has come from, and think to themselves, what good luck he has had. But it was not like that at all. If chances were not there, if they did not come Mayur’s way, with a smile he’d look again, try again, he’d learn a little more, he’d do better, he’d keep at it. He has an incessant well-meaning heart which is how he plays football. He does not give up.

On top of this, as Mayur gains, he gives back, and already he has taken reigns of AFL football in Maharashtra and captained the Maharashtra Giants. He has also taken under his wing a multitude of youngsters in Dharavi Mumbai who are learning AFL now from him. So he has the next generation of AFL Maharashtra looked after as well.

So where is Mayur from? He has lived in and around the Bandra and Dharavi areas of Mumbai. Two suburbs side by side, with very different reputations. Bandra is known as the Queen of Mumbai and Dharavi suburb is known to be home to one of the largest slums in the world, and yes it is also prime real estate. Nonetheless, anyone who really does take the time to visit Dharavi would see there is so much more than this external perception. Its defining traits are its industrious, busy, creative, friendly and supportive nature, amongst a landscape of twisting and turning and overlapping corridors that lead between homes, schools, businesses and playgrounds throughout the suburb.

It was through Mayur’s connections in Dharavi that he got his first chance to play Australian Rules Football, on a day he remembers as ‘the day he discovered his passion’.

One opportunity led to another and finally they led here to Australia where he finds himself representing his country in AFL.

“In Dharavi, an NGO called ‘Reality Gives’ runs community based programs and activities, one of which I participated in,” Mayur tells Indian Link. “I joined a program of computer classes and completed the course in 3 months but continued to come, to keep learning, to lend a hand, to keep being part of the Reality Gives network”.

Finally his enthusiasm was rewarded, and Reality Tours, the fundraising arm of the NGO, gave the youngster a position as a caretaker, and then later on as a tour assistant. As a tour assistant Mayur was able to become fluent in English and meet many people from around the world.

Reality Tours runs activities in and around Dharavi Mumbai. It aims to break down negative perceptions people may have of less developed communities, to assist in generating social change, and to give back to the community and create opportunities.

“One day at work my boss called me into his office,” Mayur recounts. “Expecting some work to come my way, I was surprised when he told him to get my gym shoes, t-shirt and shorts and any friends interested. We are going to Shivaji Park, he said. Well then we must be going to play cricket, I thought, so of course I was interested”.

When they arrived what Mayur saw was not cricket but an “amusing game of people playing with a funny oval-shaped yellow ball”.

Two years later and Mayur’s enthusiasm was rewarded again He became captain of the Maharashtra team. And a few years on again, he has been chosen to represent India at the AFL International Cup.

At such a young age, Mayur is considered a peer among his football mates, because he is motivated and focussed on improving and moving on up, but also he is focussed on helping those around him in also moving on up.