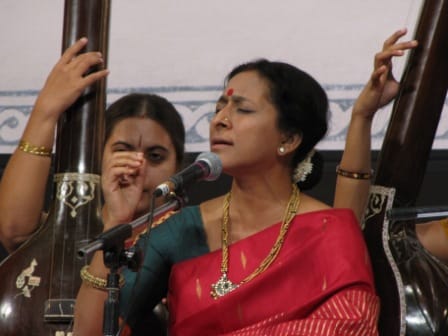 Silent and gentle waves glistened in golden hues as the sun set across the iconic Sydney Opera House. It was a stunning Sunday evening in Sydney and amidst the usual travellers, there were quite a few familiar faces clad in traditional Indian attire walking into the Opera House.
‘Marghazi Couture’ as they call it, seemed to be the fashion trend of the night.  Women in their beautiful Kanchivaram saris and traditional jewellery with big bindis on their foreheads were greeted at the box office with fresh tiny strands of jasmine flowers. They graciously pinned these into their hair to complete the look. As people moved into their seats, I noticed that this look was not just popular with Indians in the audience, but was very beautifully sported by a handful of Australians as well.
An unspoken code of silence ensued, as the audience waited in great anticipation and excitement to see the performer of the night – Bombay Jayashri. An artist who definitely needs no introduction, and indeed rightly so, so no time was wasted in one prior to the performance.
Bombay Jayashri entered the stage in a beautiful green pattu saree, as avid followers of the ‘Marghazi Couture’ sighed in awe and appreciation. Without much ado she began with Valaji Varnam, a composition by late legend Lalgudi Jayaraman. The performance was scintillating and a perfect homage to the legendary musician and teacher.
Jayashri then went on to sing Shyama Sundaranga (Dhanyasi raga) followed by Mamavameenakshi (Raag Varali). It is a common sight at musical concerts or ‘kutcheries’ as they are called in south India, for the audience to clap along with the performer, the tala/talam to which the song is set. This venue was no exception as the audience, entirely oblivious to their surroundings, clapped and nodded along in praise of the performance.
Enta Muddu was the next song on the list, a beautiful composition by Saint Thyagaraja that talks about looking beyond materialistic pleasures and exploring the beauty of the divine. The song was very soulfully delivered by Jayashri. This was followed by another gem of a composition by Thyagaraja, O Rangasayee (Raag Khamboji).
A typical classical music performance includes along with the singer, percussionists such as a mridangam player, a violinist and tambura player.
HN Bhaskar the accompanying violinist completed Bombay Jayashri’s improvised phrases on occasions and there were times when her voice and the violin converged into one. VV Ramama Murthy’s mridangam and Giridhar Udupa’s ghatam complimented and competed with each other during the performance.
The thani avarthanam (percussion solo which is one of the highlights of a modern Carnatic music concert) is worthy of mention here. Set to the Adi talam it was a mesmerizing duel between the mridangam and the ghatam that culminated in a grand finale when Bombay Jayashri resumed where she had left off.
In Kanden Kanden in Raag Bhageshwari (a raga which depicts the emotion of a woman waiting for reunion with her love), Jayashri’s performance, true to the raga, invoked the feeling of yearning and devotion within the audience. Sarvam brahma mamayam (Raag Darbari Kaanada) followed soon after.
A lively thillana in Raag Behag was skillfully performed next. This thillana was also a Lalgudi Jayaraman composition. As is ritual, Jayashri adeptly ended her performance by singing mangalam. While the Carnatic music aficionados know that when this marks the end of a Carnatic music performance, many hoped against hope that this was not the end of a magical night. With a heavy heart and immense pride, everyone then stood up to give Bombay Jayashri the standing ovation that she rightly deserved.
Apart from the music, what I took away from this performance was the humility and grace with which Jayashri conducted herself throughout the night. No unnecessary pomp and show, not the slightest hint of arrogance and best of all, no unnecessary pretentious presentation. Most concerts and events nowadays seem to lack in substance, and this certainly was an exception and a welcome break. I left raring for more and slightly disappointed that Pi’s Lullaby, the song that earned Bombay Jayashri her Oscar nomination, was not a part of her repertoire for the evening.