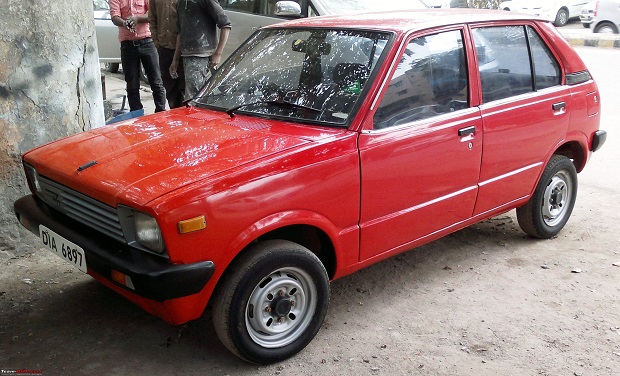 Discontinuing manufacture of the car of the people will leave behind many memories, and a tinge of sadness

This conversation won’t be happening anymore, as Maruti Suzuki has taken the decision to stop producing the original, much-loved Maruti 800. It was cheap, affordable, the young loved it and the old felt in control driving it. If it broke down, it was light enough to push along, and almost any workshop in the country could repair it. It was miserly with petrol and was known to carry a whole baraat, well almost!

‘So what is common between a Maruti and a haemorrhoid problem?’

‘Everyone gets it sooner or later’.

The reality is that almost everyone did have a Maruti, and along the residential streets of Delhi it seemed as if their numbers grew overnight, like mushrooms in the dark. The Maruti seemed to be a part of the family and enough jokes were told about it to fill volumes.

But it was not always such light-hearted fun. Going back in history we might recall the dour days of the stagnant Indian economy, influenced by the Soviet style 5-year plans when the only cars on the streets were the Fiat 1100 and the Hindustan Ambassador from Italy and England, respectively. These models, already thrown onto the scrap heaps in their countries of origin, were introduced into India in the 1950s and 60s and for decades, were the only vehicles to be seen chugging around the streets. Surely, this discouraging state of affairs could not continue forever.

The public was disenchanted. The cars available were expensive, one had to join a waiting list when placing an order, and then accept whatever colour of car that was offered. New cars were already out-dated, did not have pleasing designs, had little character and were basic in the extreme. The public was being taken for a ride! Then along came the swashbuckling Sanjay Gandhi, son of Prime Minister Indira Gandhi. This young man had taken to tinkering with motor vehicles in his younger days and to consolidate his learning, he served an apprenticeship with Rolls Royce in England. He came back to India with a vision of producing an indigenously made car from scratch that would be affordable for the masses. The favourite son was soon given a licence to produce an automobile. The name ‘Maruti’ was chosen and Gandhi set about making the automobile he had visualised. Regrettably, his efforts came to naught as he underestimated the complexity involved in producing a road-worthy machine.

In Mrs Gandhi’s second term as PM she resurrected her son’s idea which clearly had a lot going for it, and set about making it a reality, in earnest. The rest is history!

In 2012, the 10 millionth Maruti was sold. Of the series, about 2.8 million Maruti 800s were sold in all, and this car has been exported to many countries. Even the Kathmandu taxi fleet is almost entirely made up of these cars.

The introduction of the Maruti 800 was more than just another car from which to choose. It was a breath of fresh air. The country was being released from the shackles of the Fiat and Ambassador. There was now a choice, a more modern, up-to-date design and engine. When a country is used to carrying a family of four on a scooter, the tiny 5-door hatchback felt more like a limousine. At a price of around two-thirds of that of a Fiat, the demand for this car simply skyrocketed!

After using it for a few years, my aunt wanted to sell her Maruti 800. “You can’t do that, we’ll have it”, said her children. So the 800 went down the line from parents to children and onto friends. Like a pet, one just doesn’t have the heart to get rid of it.

But the time has come! Maruti Suzuki announced that they are discontinuing production of their original Maruti 800. Maybe this should be a time of sadness in India. Now with a choice of almost 100 cars, the 800 has had its time and goes out quietly. But surely it will be the one remembered, when many other models have faded from memory.