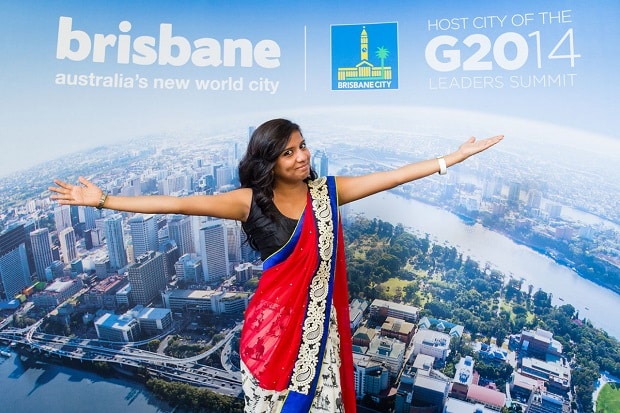 Brisbane’s Akansha Panday was one of a long list of  International Student Ambassadors named for this year recently by Lord Mayor Graham Quirk in Brisbane. 36 students from 34 countries were picked. They will represent their respective nationalities among the student community.

The nineteen-year-old told Indian Link, “This has been overwhelming. It is such a big responsibility to be representing Indian students as an Ambassador. The role takes confidence and good communication skills and I have been working on the same all through my years of growing up. I am very happy and proud of myself today”.

Currently in her first year at the University of Queensland pursuing a degree in Bachelor of Arts and major in Journalism, Akansha has been in Brisbane for over two years now. She moved with her family from Brisbane’s sister city Hyderabad, India to join her father here.

Chatty and friendly, Akansha tells us her motive in applying for the International Student Ambassador program.

“I enjoy social networking, helping others, getting to know people their thoughts and ideas, and always wondered what it would be like to be a Student Ambassador. I went online and filled in an application in December last year for the role”. When applying, she cautions that one should know what one is doing, and keep in mind that the role will be the contact point for all students to be easily approachable.

“I gave an instance of where friends from Bangalore and Mumbai had come to study in Brisbane. They were new to the city so I took them around to show the nearest place to get groceries, the different routes to uni, getting on to public transport and assisting them in their day to day life”.

It was her self-confidence that paved the way for her being elected as an International Student Ambassador, she quips.

“In my years of being in Brisbane, I have realised you need to stand up to take initiative and be accepted. I have seen cultures and have adapted… you need to constantly adapt in order to thrive”.

As an International Student Ambassador Akansha’s responsibilities are to ensure Indian students are safe, assisting and guiding them in Brisbane and also helping them work through any problems or issues faced. Events will be organised throughout the year at various places by the City Council for the students to meet and interact with their Ambassadors.

Student Ambassadors volunteer at multicultural events, international events such as the Asia Pacific Screen Awards and the upcoming G20 Leaders Summit in November, and assist with the hosting of official visiting delegations, particularly from Brisbane’s Sister Cities.

Lord Mayor Graham Quirk has been passionate about involving students in spreading the word on why Brisbane is increasingly the city of choice for international students.

“International education is Brisbane’s biggest export industry with 75,000 student enrolments annually generating $3.77 billion in course fees and other spending,” he said at the City Hall ceremony.

Commenting on the other thirty five Student Ambassadors Akansha says, “They are like my second family. I have met them a few times and there’s a strong bond that has already been fostered among everyone. There is a sense of positivity and engagement in the group”.

So what does Akansha find endearing about Brisbane?

“Brisbane city works both ways, you know,” she replies. “I can go out and have a good time and at the same time a quiet walk in the streets helps me process my thoughts and keep to myself”.

As for students looking at visiting Brisbane, she advises, “The best part about our city is the weather, it’s warm and sunny and fresh all year round”.

“By Brisbane River in the evenings!”