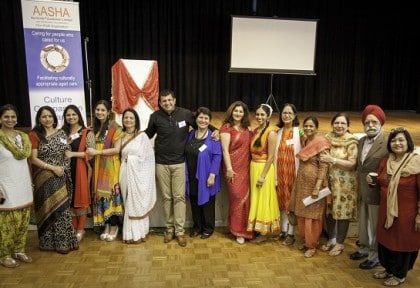 AASHA continues to raise awareness of issues affecting the elderly, this year focusing on dementia

Susan McCarthy, General Manager Services from Alzheimer’s Australia and Dr Perminder Sachdev, Clinical Director of the NPI at Prince of Wales Hospital, gave specialist presentations on dementia. Dr Sachdev, who is also a professor of Neuropsychiatry and Co–Director for Healthy Brain Ageing at the University of New South Wales in Sydney, spoke about how dementia is a general term for a decline in mental ability, severe enough to interfere with daily life. Memory loss is an example, however may not always mean it is dementia. Alzheimer’s is the most common type of Dementia.

Team AASHA believe that there is a need to change the culture around the topic of dementia and make it easier for ageing Indian Australian seniors to talk about the condition without stigma. This was the highlight of the presentation made by Anurag Vasisth, co-founder and director of AASHA, along with showcasing AASHA’s journey to date. Vasisth noted that most seniors in the community suffer due to lack of awareness of dementia and their unwillingness to talk about it. Other factors like the lack of their social inclusion, social stigma about mental health, busy lifestyle of family members and lack of culturally appropriate care options add to their suffering. The initiatives of AASHA are aimed at helping seniors out of this suffering and enabling them to live an active and happy life.

Cecilia Milani, Manager of Partners in Culturally Appropriate Care (PICAC), NSW & ACT at the Multicultural Communities Council of Illawarra (MCCI), a not-for-profit organisation, gave a presentation on the My Aged Care service. Cheryl Khurana and Rekha Rajvanshi effectively steered the event as MCs.
In her presentation, Bijinder Dugal, also a co-founder and Director of AASHA, shared the organisation’s focus areas for 2017. Next year, AASHA wants to attract more volunteers to start additional social hubs for seniors. AASHA volunteers will also provide regular media interviews to create greater awareness of its services. Further, AASHA would like to bring various community organisations together in one platform for aged care, to create inclusive communities and to make such services available for ageing seniors.

To celebrate NSW Grandparents Day, Team AASHA hosted a multicultural entertainment program, followed by high tea. The program was kicked off by Dr Pradnya Dugal, Radiologist, Director of Monsuun Dance Group and a key member of the AASHA Advisory board, who mesmerised the audience with her classical Indian dance performance. Later, the senior ladies from Sri Om Foundation and AHIA, delighted the audience with an energising Gidha performance. The entertainment program concluded with a special group song, sung by grandchildren together with their grandparents, led by popular local singer Vinod Rajput.
The event attracted more than 200 members of the community, including Dr Hugh McDermott MP, Jodi McKay MP, Julia Finn MP, Daniel Mookhey MLC, and Councilor Gurdeep Singh. Community leaders like John Kennedy, President UIA; Rohitas Batta, President Lions Club of Sydney Indians; and Harmohan Singh Walia of GOPIO were also in attendance.
The event concluded with a vote of thanks by Dr Praful Valanju, also a co-founder and Director of AASHA. Everyone appreciated the efforts of AASHA Australia Foundation to celebrate ageing as a way of life.
For more information visit aashaaustralia.org.au