Tulsi Gabbard: The first elected Hindu in the US Congress 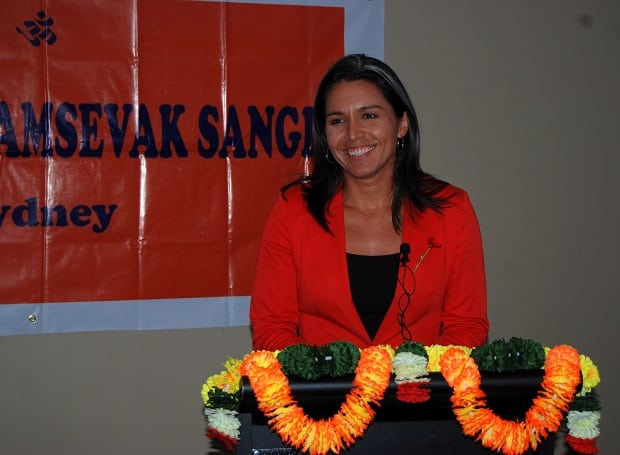 A young American Hindu’s philosophy of life blends the teachings of the Bhagwad Geeta with the aloha spirit, reports ASTHA SINGH

She came with the spirit of ‘Aloha’ (the traditional Hawaiian greeting), and inspired all of us with the essence of Karma Yoga and spiritual Hinduism.
The charming Tulsi Gabbard, an American politician who represents Hawaii’s second congressional district in the United States Congress, visited Sydney early this month.  She was invited to meet with interested members of Hindu, Indian, American and Australian origins at the Radisson Hotel during her visit. Organised by the Hindu Council of Australia, Friends of India Australia Inc. and the Hindu SwayamSevak Sangh, the event saw over 100 like-minded people attend.
As Ms Gabbard lit the traditional lamp, she was greeted with a Hindu welcome song in Sanskrit, Sarwa Mangal Maangalya, Shive Sarvardha Sadhikey.
32-year-old Tulsi Gabbard introduced herself as someone who understands the challenges that Hindus face throughout the globe, and clarified that she is not of Indian ancestry though she is often mistakenly perceived as a person of Indian descent.
“However, I do want to learn Hindi to help me understand Hindu religious scriptures well, and to enable me to communicate with the Hindi-speaking community,” said Ms Gabbard.
Born in Leloaloa, American Samoa, the fourth of five children of her parents, Tulsi grew up in a multicultural, multi-religious household in Hawaii. She fully embraced Hinduism as a teenager with encouragement from her parents who practised karma yoga, especially with her mother being a practising Hindu.
Being an extremely shy person in her early age, Tulsi was more interested in books rather than leadership, growing up. Leadership came as an initiative she took in her teenage years by forming an environmental coalition when she understood the meaning of ‘sewa’ and how she could be of service to others. Thus began Tulsi’s journey of service to society. Today she is the youngest woman in Congress.
But before she entered public life, Tulsi joined the National Guard and spent a year in Iran and Baghdad. Serving in a medical unit, she claims she ‘understood the meaning of life’ and that it is a blessing to all of us. She also began to understand the real essence of the Bhagwad Geeta, while acquiring perspective and figuring out the difference between what is petty and what is important.
“The Bhagwad Geeta teaches us to look at diverse cultures and respect each other for the spirit soul we really are,” explained Ms Gabbard.
The Hawaiian way to say hello, ‘Aloha’, means sharing the eternal breath of the soul, she said. It removes all existing barriers to communication like socio-economic class, educational pedigree, race, religion, ethnicity, anything that separates people.
The parallels with the ‘Namaste’ of the Hindu culture are obvious.
“Greeting others with a sense of respect and sincerity filters a lot of barriers, is a great and useful way to overcome the political divide, and can open up conversations,” stated Ms Gabbard. “Diversities within different communities in the US is what makes its society unique, and tolerance, respect and sincerity amongst one another is the key to a great society”.
Ms Gabbard is proudly pushing for a Diwali stamp in the US Congress, which will help people from other parts of the country understand the deeper meaning of the festival: it will initiate conversations about the spiritual foundation of what symbolises the festival, truth over untruth, which is most beneficial in politics and everything we do.
At the Q&A session towards the end of the event, Gabbard impressed all present with her ideal answers and inspiring clarifications to every question. When asked, “What was the biggest milestone in your political career?” by yours truly, Ms Gabbard proudly stated that during a session in Congress, all her colleagues recited ‘Rama Krishna’ with her, and that was a very important personal milestone.
Ms Gabbard spoke beautifully of her mixing of military service with her deep-rooted spiritualism. A lifelong vegetarian, she has also been a long-time practitioner of martial arts and uses yoga to create a sense of balance between her various endeavours.
She also talked about her plans to travel to India soon, and stated that she seriously advocates Hindu human rights in Pakistan and Bangladesh.
Ms Gabbard comes across as a personification of the Obama period, with its crushing of political typecasts and upsurge of cultural diversity.
Gabbard consistently seems to specialise in ‘firsts’ – she is the first person born in American Samoa to be elected to Congress; one of its first two female combat veterans, and the Congress’ first elected Hindu.