Truly a realm of wonder! 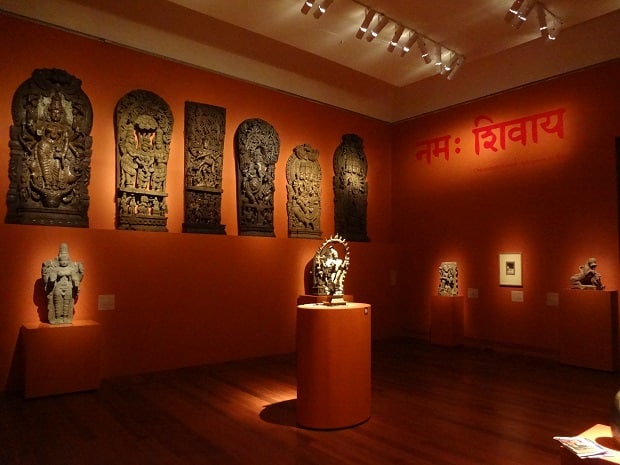 To savour the artistic riches of India, one had to go no farther than the Art Gallery of South Australia. In mid-October, the Gallery launched an exhibition titled, Realms of Wonder – Jain, Hindu and Islamic art of India, at a gala function held on its rear courtyard. The invited guests, numbering around 200, included Adelaide’s art aficionados and several Indians from various community groups.
Showcasing more than 200 paintings, sculptures and decorative art pieces dating from the 8th century to the present day, the organisers proudly proclaimed, “It is the Gallery’s first major exhibition dedicated exclusively to the art of India. Many of the works are on display for the first time. Jain art has never before been comprehensively displayed in Australia”.
Welcoming the guests at the launch, Gallery Director Nick Mitzevich said the first piece of Indian art was obtained in 1904, but serious collecting of Asian art started only a few decades ago.
Gallery’s curator James Bennett told Indian Link that, “All but one of the exhibits have come from local sources, many from our own collection that have been sitting around for over 30 years, but have never been exhibited. Quite a number are from local collectors and one is from a European collector who has volunteered it to be displayed on hearing about the exhibition”.
How much contribution came from local collectors was evident in the introductory speech of Mr Michael Abbott, a leading QC and Gallery’s Board Chairman, when he thanked a long list of persons who have loaned or gifted their prized possessions to this exhibition. It was heartening to know that so many Adelaidians are interested in Indian art.  However, modesty prevented him from mentioning that a good number of them are from his private collection.
Mr Abbott, a legal luminary, is well known for his huge collection of Indian artworks including antique textiles. It is interesting to note that this top silk who delves in forensic details in court, is equally dedicated to the fine arts. Visitors to his grand old house are reported to have a sense of entering an Indian art gallery. He does not hold the pleasure of his collection just to himself, but has shared it with the wider public by donating or permanently loaning a large number of them, valued around $5 million, to galleries around Australia with the SA Gallery getting the lion’s share.
When asked what sparked his interest in Indian textiles, not very common for collectors, Mr Abbott said, “I once went to a trade textiles fair in Indonesia and saw fine Indian textiles there that sparked my interest in them. My first acquisition of Indian art was in the early 70s. My special interest is in the Coramandel coast and Gujarat”. He has visited India countless times in pursuit of his passion, besides snapping up rare pieces at famous auctions overseas.
Among other benefactors to this current exhibition are Mr Barrie Heaven, who once owned the renowned Lord Kitchener restaurant, the only Indian eatery in Adelaide until the 70s, and Mrs Judy Heaven, former curator of the Gallery.
How meticulously the current exhibition was organised can be evidenced the moment you climb down the stairs where a larger than life wooden temple guard, a common sight in South Indian temples, catches the attention. The entire basement has been segmented into six sections with each entrance decked with large, intricately carved wooden panels giving a feeling of entering a temple or royal court. One section is devoted to Jain art. Sculptures of Shiva hold court in one room while paintings of Krishna and statues of Vishnu pervade the other, representing the two major sects of Hinduism.
Antique textiles take up one section, while silverware and jewellery occupy another. Islamic art has good coverage where every wall was covered with Koranic scriptures as can be seen on the Taj Mahal or famous mosques. Attention to detail is admirable.
Curator Bennet said he sought the help of Prof Richard Cohen from Virginia University in the US, and two Iranian experts to get the correct translation of notes accompanying some Islamic art pieces.  Offering an idea of the work behind the show, he said it took 18 months of planning and full four weeks of installation by ten workers. The entire set-up was not just a showpiece of workmanship, but a work of art in itself!
As it could take an hour or two to see the treasures on display, children can make their own artful creations with play dough in an activity room where many Ganesha idols crafted by young and old adorn the shelves.
The Realms of Wonder exhibition is not limited to masterpieces of art. It comprises a series of lectures on all aspects of Indian art, workshops on draping a sari, henna decoration, tabla playing, music and dance performances, yoga and meditation classes, Hare Krishna chanting, Deepa Mehta’s three movies and even a tour of the adjoining Botanic Garden to explore Indian flora. Deserving of a bouquet, this elaborate show goes on until January 27, so interstate visitors during the Christmas holidays can enjoy a rich, artistic feast. Details are available on the Gallery’s website at www.artgallery.sa.gov.au
Adelaide’s North Terrace that houses the gallery, museum, State Library and two universities is aptly called the cultural golden mile, and it is now further enriched with priceless treasures from India.