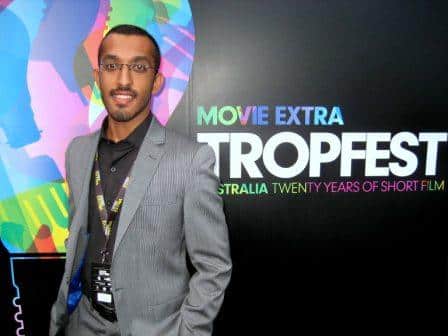 Kalias Prasannan has loved M&Ms since he was a kid. By habit however, he eats them one colour at a time…

Now you might think this is eccentric, but it has opened up a whole new world for this young engineering student.

What if we could see only one colour at a time, the thought occurred to him one day. He turned that thought into a film, which was picked as a finalist in Australia ’s most popular short film festival Tropfest.

Tropfest, ‘the largest short film festival in the world’ and one of Australia ’s many symbolic cultural events, presents a unique platform to aspiring filmmakers in the country. What makes Tropfest distinctive is that the films created are wholly for the festival and include a different Tropfest Signature Item (TSI) every year. For instance, the TSI for 2012 was ‘Light Bulb’. (For 2013 it is ‘Balloon’). 16 finalists are selected from an average of 700 entries every year and one such finalist this year was the extremely gifted and creative Melbounre-based youth Kailas Prasannan for his film RGB (Red, Blue & Green).

Having watched the film, I can vouch that it’s a work of art and is sure to transport you to a completely different world.

This short film, just five minutes in duration, encompasses a very interesting concept in that it is about a young man suffering from total colour-blindness who can see three colours – red, blue and green, but only one at a time. Who would have thought a weird fondness for M&Ms would be the starting point for a critically-acclaimed short film!

Kailas notes, “We take colour for granted…we all must take a moment in our busy lives to pause and admire everything around us”.

According to Kailas , advancement in technology was another decisive factor in making the film. He explains, “I stumbled upon software that could highlight just a single colour from an image and I then incorporated this into a story of a person being able to see only one colour at a time”.

What makes his story even more intriguing is that he has no background in film-making: his only technical knowledge came from editing home videos and pictures in the past which ultimately came in handy. He was driven purely by confidence, passion and desire to make RGB a reality.

However, as a beginner, he’s had his share of challenges during the entire film-making process and is very thankful to his team, Jason Palmer (cinematographer), Rob LaTerra (actor) and Abin Thomas (production assistant) for standing by him through tough times – he admits he thought of abandoning the entire project, not once but twice.

RGB was made on a shoe-string budget of $600. Kailas purchased the audio rights for the film for just $80 online and the film was shot during weekends in Melbourne . It took four months to complete. To explain an idea in five minutes is no easy task as Kailas agrees, “Conveying the story in a few minutes while trying to maintain a good pace was indeed a challenge and moreover, I found it hard to stay constantly motivated”.

The multi-talented Kailas is a professional Fire & Safety Engineer who hopes to complete his Masters degree in Engineering by the end of this year but doesn’t rule out the possibility of making the switch to show business. “If the opportunity does come along to be a filmmaker, I’ll definitely take it up. I have a few ideas but need to be smart to accomplish them one at a time. The ultimate goal would be being a part of feature film productions”.

Looking ahead, Kailas has several upcoming ventures which are in their early stages at the moment. He claims, “My next project would be a short film with a touch of horror. In regards to Tropfest 2013, I have an idea which Rob is currently helping me with and I hope to produce another short film this year. Tropfest has boosted my confidence as a budding filmmaker and although we as a team lack technical expertise, we know that we can still achieve what we want. RGB’s success has motivated us to attempt more short films”.

Many congratulations to Kailas on his stupendous run at Tropfest 2012. He is inspiration-personified as he has shown us that we can achieve our goals if we work towards them with ceaseless enthusiasm irrespective of where we are and what we do. You can follow http://www.facebook.com/ManjadiEntertainment for updates.