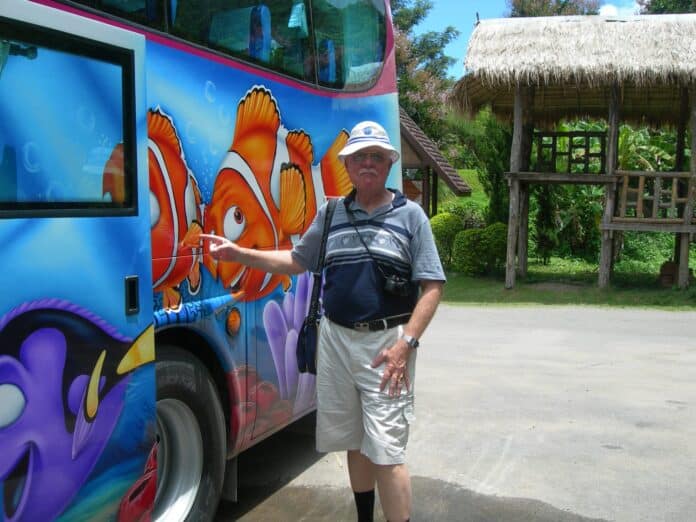 What does the E in your name stand for, I once asked Tom King.

“Exuberant!” he said without a moment’s hesitation, in that American accent he never lost even years after leaving his homeland. “Enthusiastic! Energetic!!”

He was all of those, for sure, and more.

As the quintessential Indophile who travelled to India countless times, he was for many years in charge of our Travel section. He brought to our readers gems from the length and breadth of the country, and not just those on the regular tourist’s itinerary.

Tom took his Indian Link readers with him as he visited the Taj Mahal lookalike at Aurangabad (Bibi Ka Maqbara); journeyed slowly through the Khyber Pass; tasted tea in Darjeeling; shopped for pearls in Hyderabad; took a safari in the Sunderbans; studied the (golf) greening of Delhi; gazed at the Kanchenjunga from Sikkim, and prayed at the temples at Tuticorin where, he told us, 37 American tourists are said to have burned their Bibles and professed allegiance to Hinduism.

And all this in his first two years as an Indian Linker.

Some nine years later, as I suggested to him that he could probably write about destinations other than India, he was aghast. What, travel outside of India? No!

Well, he did; and brought us articles seeking out Indian links in Shanghai, in Sabah, in Hue, and in innumerable other places.

As well, he wrote about travel trends, reported on travel conferences, and attended Indian Tourism events in Sydney where he would take to the microphone and impress with his salutations in Hindi and Urdu, and with his khadi kurtas, extra long of course, to fit his straddling stature.

Tom lived to travel, and loved travelling to the subcontinent the most. (Reproduced below is a piece by him from our archives, which he penned in the year 2000). Without doubt, his work helped raise the image of India as a tourist destination for many western readers.

Golf – another great passion – was always quite clearly the second, or third, love of his life, in deference to his beautiful wife Kamala (Kay).

Tom continued to write even after cancer became an unwelcome visitor.

“They’ve taken half my stomach out” he told me after his first operation, and described the scar that ran halfway round his waist.

He was still Mr Enthusiastic, though in months to come he became a little less Mr Energetic.

I offered that he could dictate his columns to either of my two kids, who were ‘grown up’ now ever since he first came to visit them both when they were born, bearing the cutest little gifts.

He became too ill to write shortly after.

The devoted Kamala took the help of Jesus as she cared for him in those last few difficult months.

At his memorial in Kingsford in late January, a giant Tom smiled down at us from the front of the church, wearing his favourite purple trim Himachali Pahari topi. The very same photo that accompanied his pieces on our pages, it was indeed a hark back to his Indian Link days.

Rest in peace, Tom, and Shukriya, to use a word that you yourself used frequently.

You Entertained us, Encouraged us, and Enriched us in a multitude of ways.

Like so many westerners I had no interest in India and I was most certain that I would never go there.

The Western media had done its job well. Press reports and television coverage convinced me that India was totally poverty-ridden, prone to endless disasters and had nothing to offer the visitor.

Such opinions about India were furthermore enforced by accounts from the “well travelled” who, although they hadn’t actually visited India, had formed very strong opinions about the country.

These had been solidified over the years by media reports and the accounts they had heard from other travellers. The endless cycle of ignorance continued.

Having listened so intently to the well-informed, it was with some considerable trepidation that my first trip through the subcontinent was planned.

India, admittedly, would not be my final destination. Instead it would be but a mere stopover on a continent-spanning journey.

Back in the early 1970s it was not only possible, it was widely popular, to make an overland coach trip from London and on to Delhi.

(The majority of overlanders wouldn’t stop there, however, as they planned their journey to actually conclude in Kathmandu.)

After flying from America to Europe and taking a few months to spin around the continent, I joined 22 other intrepid travellers.

While we hailed from six different countries all of us had the same ultimate destination in our diaries: Australia.

Our overland odyssey took us from London, over the English channel, through western, central and southern Europe and to Turkey.

Once we crossed the massive bridge over the Bosporus Strait my pulse increased significantly. West had become East; at last I had arrived in Asia.

Though it was Asia Minor and I was at the farthermost outpost of the immense continent, it was a major step for me.

The journey continued through the rest of Turkey, into Iran and then Afghanistan. Back in the early 1970s before occupation and wars decimated this landlocked nation, it was a mecca for travellers.

We finally arrived in the subcontinent as the last passport was checked and we drove past the Afghan/Pakistan border.

Hundreds of years later the great Moghuls and their extensive entourages also made the journey.

I gained an understanding of their civilisation and saw some of their priceless handiwork in Lahore at the immense Badshahi Mosque, built by Aurangzeb and the ornate Shalimar Gardens that Shah Jehan so skillfully constructed.

I asked the driver/guide countless questions about the subcontinent in general and India in particular.

Some of my fellow passengers on this overland coach trip had previously travelled through India by road when they went to Europe. I asked them even more questions.

I entered India for the first time in December 1973. My 21st trip there is planned for November 2000.

I still haven’t decided if it’s the diversity of people, activities or sights that fascinates me the most.

Most likely it’s that my appreciation of the country has been moulded by all three in the roughly quarter of a century since that first visit.

I have seen poverty and disaster but I have been able to look beyond these matters to see an India that doesn’t get on the front pages.

Pinning down my favourite area in a country which is the world’s largest democracy, gave birth to three major religions, has the highest mountains, is one of the most densely packed countries on the planet, has one of the world’s oldest civilisations and is washed by three seas – to herald only a few superlatives – is impossible.

Should I prepare a chronicle of contrasts and adventures I have seen and experiences I have had over the years, my task would never be complete.

I would always remember something more as my memory would guide me around the country time and time again.

One event in the busy film studios of Mumbai would remind me of the solitude in Assam’s rhino-filled Kaziranga National Park.

That would lead me on to pleasant memories of sipping samples from a coffee salesman in Yecaud which would then remind me of taking tea with a Buddhist school girl in Kalimpong.

This would take me to the Punjab and listening to an early morning session of prayers at the Golden Temple which would remind me of attending Easter services in English in a little church in Darjeeling.

Beyond this would be fond recollections of a week of pampered nights onboard a houseboat in Kashmir, a feast of Goan delicacies and then strolling the back streets of Panjim, an overnight rail tripthrough rural Andhra Pradesh, a jeep ride through the lush jungles of southern Karnataka, taking to the tees of the delightful old Tollygunge golf course…and the list goes on and on.

India, for me, retains its mystique…yesterday, today, always!