The statue of peace 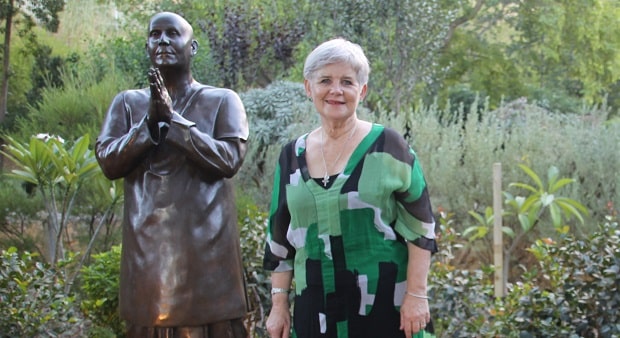 A musical offering of Sri Chinmoy’s peaceful and uplifting compositions performed by local and interstate singers and musicians was offered at the at the ‘World Peace Dreamer’ statue in the scented gardens of Sir James Mitchell Park in South Perth on  Saturday March 15. The statue depicts Indian born Sri Chinmoy (1931-2007) in a meditative pose and honors his efforts to foster global peace. “Peace, means a flood of love in the world family,” he said. “Sri Chinmoy was most well known as an artist, musician, spiritual master and for offering meditations at the UN headquarters in New York for over 35 years to the staff and delegates”.

The performances were part of a celebration of the third anniversary of the statues inauguration and to honour Sri Chinmoy who arrived in the West from his homeland 50 years ago. The free event was attended by South Perth Mayor Sue Doherty.

“We are very, very lucky to have this statue here in South Perth overlooking the city,” Doherty commented. “I often come and pass by here, it is a special place”.

The bronze statue which stands 1.9m high, was sculpted by UK artist Kaivalya Torpy. There are ‘World Peace Dreamer’ statues in Malta, Czech Republic, Goa, Bali and over a dozen other locations around the world. Perth spokesperson from the Sri Chinmoy Centre in Perth, Prabuddha Nicol, who organised the event, said the statue aims to help spread the idea of Sri Chinmoy’s message of peace. “If people can come to these public gardens and reflect on the idea of peace in themselves then it can spread to the world at large”.

Other free events in Australia this year celebrating Sri Chinmoy’s arrival in the West include a touring art exhibition of his original bird drawings and 50 free meditation classes to the public in various locations throughout our major cities.