The spirit of the game 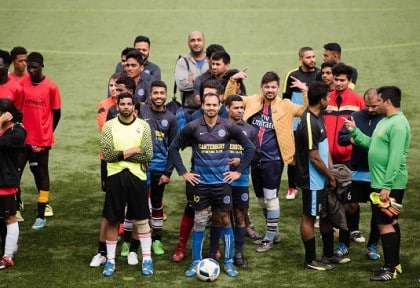 Imagine someone who was a mediocre yet passionate sportsman who grew up in India, or any other country for that matter. He migrates to Australia and, whilst plunging into the whirlpool of life, collects a few lifestyle diseases in his middle age. Providing a platform for this ordinary, yet sport-loving, average man to enjoy a good game of soccer is our ultimate aim,” said Bipin Paul, President of Canterbury Sporting Club during his opening address at the launch of season four of the Dezire Cup, a multicultural community soccer tournament organised by the club in Sydney.


This tournament, first held in 2013 solely with Malayalee community participation, has come a long way. Season four, held in early October this year, had 16 participating teams from different ethnicities including Indian, African, Afghani, Croatian, Nepali and Turkish players, from across different parts of Australia. Adopting a seven-a-side format, the all-ages open tournament saw amazing responses from all the teams that played.
“Being invited to play in a tournament, with players of similar calibre, is something we have not even dreamt of,” observed players from the team from the South African community. “None of us are extraordinary players. In that sense, this broader exposure and, more importantly, this value we have been given truly touches us.”

The tournament kicked off at 8am on a crisp Saturday morning and had the devoted attention of soccer enthusiasts for the next twelve hours. The inaugural ceremony was attended by Shadow Sports Minister Lynda Voltz, Shadow Transport Minister Jodi McKay, Mayor of Blacktown City Council Stephen Bali and Cr. Susai Benjamin; all of whom warmly welcomed the concept of a multicultural sports initiative.
Teams played against each other, in rounds of four, for 20 minutes, from which emerged the semi-finalists, finalists and winner. Wollongong United took on Canterbury Sporting Club in the finals to take home the championship.

The tournament is not just about spreading the spirit of the game among the privileged. It also has a charitable aspect, supporting like-minded people who wish to play the game in other countries as well. They are providing resources to groups of ordinary people who are genuinely passionate about the game – like when they bought boots and jerseys for an upcoming community team in Wayanad, India, with the money raised from last year’s tournament.
“This charity initiative is not about building one single sportsman; but about developing a sports culture among the individuals of the community,” Bipin Paul said. “This is particularly significant when we live in Australia, as it is motivated by the sporting culture we see here. Formed and run by a group of sports enthusiasts of Indian origin, it originates from the thinking that we need to make use of the facilities that this country provides us; and it will ultimately contribute to the social, physical and psychological well-being of everyone who joins a healthy game.”

Members of Canterbury Sporting Club are of one and the same opinion, the aim is not the vertical growth of the club, which could potentially mould them into a top league soccer club. They would rather grow horizontally, where they can support more sports and games ranging from running races to volleyball to cricket. The idea is to use sports as a tool to bring about social inclusiveness, foster community health and instil values of team work amongst the players.
The prominent American sportscaster Bob Costas, who was the television host of 12 Olympic Games, was absolutely right when he said, “The best thing about sports is the sense of community and shared emotion it can create.”
From a few friends meeting together to play a casual game in their home ground at Croydon Park, to conducting its fourth annual multicultural tournament, Canterbury Sporting Club is proving just that.
Photos: Paramounte Creations
- Advertisement -
Share
WhatsApp
Facebook
Twitter
Linkedin
Previous articleFestival of eats
Next articlePack your bags for Penang!