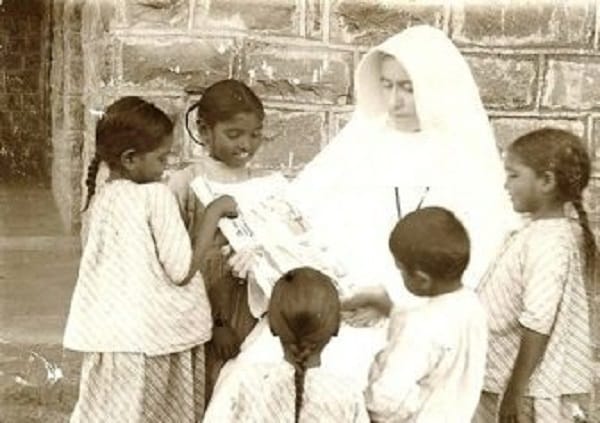 At first, the sight of the gentle white doctor moving between earthen huts of Guntur must have caught the eyes of the villagers. Her face was serene, her eyes attentive. That this woman had left her successful surgery in Melbourne in 1920 and come, with the blessing of Pope Pius X1, to administer care to the sick and incurable of Guntur added further grace to her work. But soon her palliative visits to the lepers and cancer stricken of Guntur became commonplace.

She was one of them, an Australian female doctor immersed in their problems and traditions, and potentially, Australia’s second saint.

Dr Sr Mary Glowrey, born on 23rd June 1887 in the small township of Birregurra in Victoria, was a remarkable woman. Of Irish ancestry and the third of nine children, her childhood was scarred by the death of her younger brother Joseph.

Mary wrote of this by saying, “That hurt and gave me a first idea of what death meant”.

Mary moved from her home in the country Victorian town of Birregurra to matriculate in Melbourne. She was an outstanding student with wide ranging interests in literature and medicine and she entered Melbourne University on a scholarship. She became a full time medical student and graduated in 1910 with a Bachelor of Medicine and Bachelor of Surgery.

Mary published a pamphlet entitled Infanticide to state her strong views that medicine should aim to heal and not harm. The improvement of female health worldwide was her lifetime passion. In her fourth year of medicine she began working at St Vincent’s Hospital, sleeping on site and giving away her clothes and blankets to those in need.

Mary went on to found the Catholic Women’s League and establish a successful clinic in the centre of Melbourne, but one Sunday, her life changed.

“From the Cathedral, I went to my rooms in Collins St,” Mary wrote. “On the hall table there was a small pamphlet addressed to me. The pamphlet was about Dr Agnes McLaren, a pioneer Scottish doctor who at the age of sixty-one became a Catholic and at the age of seventy two, went to India to establish a hospital for the care of women. It brought me face to face with Christ. My life’s work lay clear before me now. It was to be medical mission work in India.”

She spent the next 37 years involved in medical work in Guntur, India, and was the founder of the Catholic Health Association of India.

Mary established a small dispensary in Guntur, which would grow into St Joseph’s Hospital. She worked day and night, as the only doctor, attending to the infirm, as well as training local nurses and midwives in palliative care. She used her modern medical training in combination with traditional Indian medicine. She travelled to outlaying villages to provide comfort, prayers and medicine. Numerous photos of the time show her crouched beside lepers and the dying. She held, it is said, the most tender recesses of her heart for the incurable.

“She always wished me pleasantly, putting her arm around me and asking me to sit beside her,” recalls Elizabeth, one of her patients from the time, who is now an octogenarian. “I had the habit of spitting blood in bouts of cough, but the touch of Sister Mary helped me recover completely. She was always kind and generous to the poor.”

On 2nd December 2010, Archbishop Denis Hart of the Catholic Archdiocese of Melbourne, announced that the preliminary phase of the cause for canonisation of Dr Sr Mary Glowrey had commenced in Bangalore, India. On the 27th March 2013, Dr Sr Mary Glowrey JMJ (The Society of Jesus Mary Joseph), was declared a Servant of God by the Most Rev Dr Gali Bali, Bishop of Gunturat the Infant Jesus’ Cathedral, Phirangipuram.

Being declared a Servant of God is the first of four official approvals on the path to sainthood, and signals the commencement of the Diocesan Phase of the Inquiry.

For any chance of the canonisation process being fulfilled, the following three further criteria must be met:

Archbishop Hart said it would be “the commencement of the diocesan phase of the process for possible beatification” for a woman who was said “to radiate Christ by word and example,” potentially Australia’s second saint after Mary McKillop.

He wrote, “This initial phase involves a careful examination of her work and writings together with her religious life and now progresses to the next phase on the way to beatification and possible sanctification.”

Anna Krohn, national bioethics convenor of the Catholic Women’s League of Australia, said the cause was “gathering pace slowly” in India and Australia in the past decade. She described Glowrey as “an outstanding figure.”

“The commencement of the preliminary phase of the cause of Dr Sr Mary Glowrey has led to rapidly growing interest in the story of her life both in Australia and internationally,” said Robyn Fahy, a member of the Committee for the Cause of Sr Dr Mary Glowrey.

Father Dan Strickland and Jewell Start, current president of the Catholic Women’s League of Victoria & Wagga Wagga, travelled to Guntur for the beginning of the Diocesan inquiry into her cause for canonisation.

“Day 3 dawned bright and hot, and beckoned us to the pilgrimage part of our journey,” Father Dan wrote of his trip. “We made the hour and half drive past motorbikes, cows, trucks and cars to the city of Guntur, where nearly a hundred years ago Mary Glowrey had started a small clinic to begin the mammoth task of treating the medical needs of the people of that area, and in particular the needs of pregnant women. The tiny clinic is still there, along with the dispensary, lovingly maintained and still in use for the purpose that Mary originally intended it. The furniture that Mary used remains largely in place, and still stores medication, papers and instruments. Her examining table, too, remains, and is still used to examine patients even today”.

In an upcoming edition of Horizon magazine, Ms Star writes: “One of the highlights of our visit to Guntur was a tour of St Joseph’s Hospital where Dr Sr Mary Glowrey had worked so tirelessly for 37 years. Walking in her footsteps was truly humbling. The places where Mary worked and lived have been lovingly preserved, and there are photos of her throughout the hospital to inspire others working in the JMJ (Jesus, Mary and Joseph) health apostolate. We were also blessed to meet several elderly JMJ sisters who had worked with Dr Sr Mary Glowrey, and cared for her in the final months of her life. Listening to their stories made Mary Glowrey ‘come to life’ for us”.

A fellow nun who knew her well said, “It is almost certain that Sister Mary never attempted anything and never finished anything without seeking the aid and guidance of the Holy Spirit…She did attempt the impossible at all times and she tried to inspire others to attempt them also.”

On the 5th of May, 1957 Mary uttered her final words, “My Jesus, I love you.” She had suffered terribly from cancer in her last few years.

At her requiem Mass, the Bishop of Guntur described Mary Glowrey as a “…special creation of God…a great soul who embraced the whole world.”