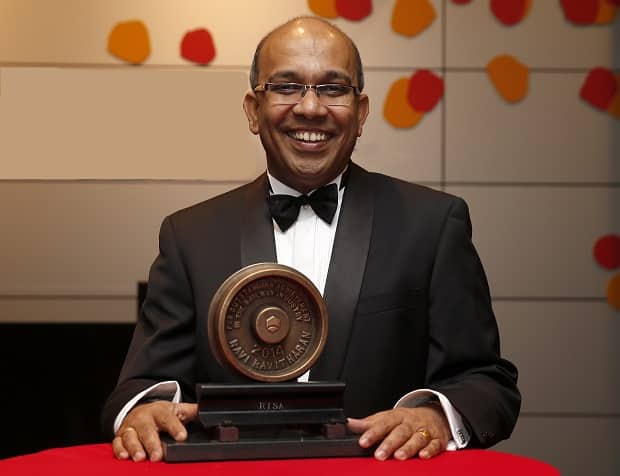 Ravi Ravitharan, Director of the Institute of Railway Technology (IRT) at Monash University, has recently been awarded the coveted 2014 Railway Technical Society of Australasia (RTSA) Individual Award, in recognition of his outstanding achievements and contributions to the field of the Australian and international railway industry.

Ravitharan was also awarded the prestigious 2014 Australasian Academy of Technological Sciences and Engineering (ATSE) Clunies Ross Award for the application of science and technology for the benefit of Australia, which he shared with two of his colleagues at IRT.

A true visionary leader, Ravi Ravitharan began his career in the Australian railway sector at BHP-Melbourne Research Laboratories, one of the pioneering railway research facilities of Australia. He was extensively involved with track, rail management and maintenance research and played a significant role in the development of the Track Design and Maintenance computer model which was developed for Railways of Australia (ROA).

Along with his strong technical and management skills, Ravitharan was part of the senior management team when IRT was established at Monash University in 2000. He has successfully completed several innovative projects during his tenure. His expertise in dealing with ventures involving multicultural aspects and diverse practices did not go unnoticed and soon he rose to the position of the Director of IRT.

An exceptional combination of sound business acumen and strong research skills lies behind Ravitharan’s success. He has elevated and strengthened IRT as an unparalleled leader in railway technology. He has chaired several international conferences and has more than 70 publications in leading international journals and research periodicals – he possesses an impressive and inspiring list of accomplishments, achievements and awards that would run for pages.

One of the oldest and largest railway systems of the world, Indian Railways may benefit from some of the technological advancements made by IRT in the future. According to Ravitharan, “the Metro public transport system is the best solution to address the traffic troubles that plague major Indian cities today”.

Since 1983, Ravitharan has been travelling to India regularly and is now working with Indian organisations to support new railway developments. “I am eagerly looking forward to the launch of the Chennai Metro system in 2015,” he said.

Monash University has a collaborative venture with the Indian Institute of Technology, Mumbai (IITB) which resulted in the creation of a unique joint research facility called the IITB-Monash Research Academy. The aim of this research institution is to develop cutting edge technologies and services in areas of strategic importance to industry, including railways in India.

The Indian Ministry of Railways has set up the Dedicated Freight Corridors Corporation of India (DFCCIL) to develop the infrastructure and technology that is critical to the functioning of the newly developed dedicated freight corridor (DFC).

The Institute of Railway Technology, which supports four of the largest mining railways in the world with their research and technological advancements, along with IITB-Monash Research Academy, will be in a great position to elevate both the passenger and the freight Indian railway systems to a world class level.

The work of Ravi Ravitharan will help provide the Indian public with modern and innovative mass-transit and freight services, which will in turn help fast track the nation’s industrial progress.