The pieces finally come together 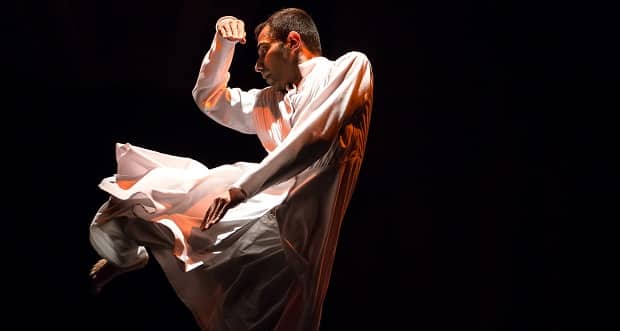 The stage is dark. You hear light footsteps, and a dark figure emerges. He crouches, and softly places an object on the floor. Silence. You hear the strike of a match. The flickering light reveals a young, bare-chested man clothed in white, loose fitting cotton pants. He leans forward, almost in reverence, and lights a lamp.

Meet dancer and choreographer, Raghav Handa. In Tukre (Hindi for ‘pieces’), Raghav explores his personal identity, re-lives sacred memories and traces his origins while taking us on a delicate, non-linear and nostalgic journey across space and time.

His confidence, grace and precision belie an impossibly late start for a dancer.

Being from an Indian background, dance is not something you do professionally.

“‘Are you going to make money off it?’” Raghav mimics questions asked of him about his dance ambitions.

So naturally, he enrolled in an accounting degree.

“I dropped out in the first year,” he reflects. “It’s not that I couldn’t do it, I just didn’t want to do it”.

Three years after he started dance classes, Raghav landed his first dance job in a production of West Side Story.

He met Sydney choreographer Vicki Van Hout, started working as a dancer and then did three years on and off at the London Contemporary Dance School.

Tukre is Raghav’s first full length choreographic work, and with it, it seems as though he’s finally piecing it all together.

“I’ve worked with a number of Australian choreographers, but it was always their movement, never the movement I set for myself,” he says. “This is my own”.

Tukre is a very intimate piece for Raghav. It takes memories of his jeweller family, everyday objects and seemingly banal tasks and weaves them together in fluid dance form.

Take the opening piece, where he lights a match.

“It’s a mundane task, but it is very special to me. It’s a memory of my grandfather, and that’s how he would look at diamonds. He would look at them with a candle or a lamp, and then look away. Everyday things like that have left a big, big impression on me, and they are essentially connecting and making a memory map”. About the artistic process itself, Raghav is clear.

“I knew these images, but I didn’t attempt to connect them. If they happened to connect, great, and if they didn’t, they don’t,” he says simply.

This sort of unencumbered approach helps in dealing with criticism too.

The piece ends with Raghav setting up an installation of his mum’s sarees.

“A critic of 30 years said the installation took too much time. I have an answer for that now,” he says. “My mother takes half an hour to put on a saree, and likes it done properly. I’m taking only six minutes for six sarees, so I’m doing a damn good job!”

Tukre’s opening night was also special for Raghav in another way. His parents watched him perform live for the first time.

“My parents don’t live in Australia; they live between the UK and India,” he explains. “They’ve seen me in videos, but they haven’t seen me perform in a theatre. My Da was saying, ‘Before coming into the theatre, I was thinking, does he really dance, can he really dance, what’s he going to do for an hour?’ But now, the penny’s dropped for them, like ‘Oh wow, that’s what he does!’”.

Dancing, however, is only a small part of Raghav’s work. “We’ve got to rig the set, get the lighting plan done, look at the sound and see how it relates to me in space… the dancing almost comes at the end,” he exclaims.

And you’d expect relief after it’s over, but not for Raghav. “The [nerves for] warm-up and the performance are expected, but actually, after the performance is the hardest bit,” he quips with a grin. “I go to bed, but my mind is still going. I go over every detail of the performance. I just can’t sleep. If you know of some tea that will help, feel free to tell me”.

When he’s trying to get away from it all, Raghav enjoys watching TV or meeting friends and zoning out.

“I love horse riding. And I’m a very good cook, if I may say so myself,” he laughs. “I love Italian food. I can cook a few Indian dishes, like aloo baingan, lamb curry, but that’s about it”.

His signature dish? “I love prawns, so it’ll have to be spaghetti with prawns!”

“Oh my word,” he exclaims when I ask him about his biggest achievement. “Sticking to my art,” he answers in a quiet tone. “I’m getting work now, but leading up to this was hard yakka. Five years ago, I almost gave up. I did a fitness course and taught classes at Fitness First for a year. I hated it. I jumped at the first dancing job I got”.

And he’s not stopped dancing since.

“I want to create a dance vocabulary; Raghav Handa technique…”, he trails off and twirls his hands intricately to demonstrate. “Hopefully in the years to come, that will happen”.