The mauling of the Congress 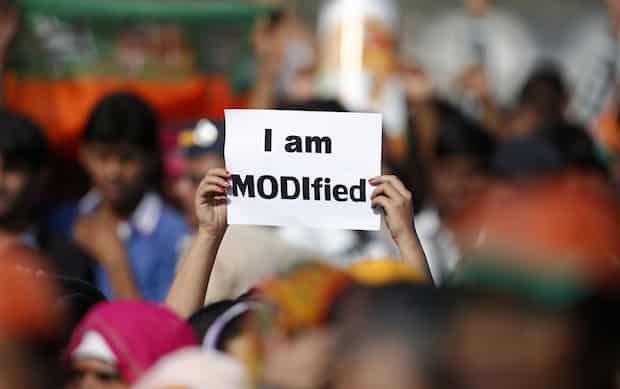 BJP’s prime ministerial candidate Narendra Modi’s prediction that Congress would not be able to open its account in several states came true, with the party failing to secure a single Lok Sabha seat from Gujarat, Rajasthan, Himachal Pradesh, Tamil Nadu, Jharkhand, Jammu and Kashmir and Uttarakhand.

Congress leaders said that it was unprecedented for the party not to score seats across regions in a general election. The party also could not cross touch double digit in any state as it suffered heavy reverses in Andhra Pradesh, Haryana, Maharashtra, Assam and Uttar Pradesh.

The Congress lost all seven seats in the national capital of Delhi which were wrested by the Bharatiya Janata Party.

Except Tamil Nadu, the party lost all seats to the BJP in the other states.
Modi had said in his rally at Valmiki Nagar in Bihar May 7 that Congress will be reduced to zero in many states where the anger against UPA’s “failure” to contain corruption was marked.

The party could win only one seat in Haryana, four in Maharashtra, two in Andhra Pradesh and three seats in Assam.

The Congress, India’s oldest party which had ruled the country for a decade since 2004, faced its worst humiliation, raising question marks about the future of the Nehru-Gandhi dynasty that has given India most of its prime ministers. Congress’ de facto prime ministerial candidate Rahul Gandhi, whose father, grandmother and great-grandfather were all prime ministers, was humbled by Modi in a way that the Congress plummeted to its lowest ever two-digit tally in a national election.

It was a graveyard for Congress stalwarts. Minister after minister, leader after leader, lost at the hustings, with only a notable few winning through to the 16th Lok Sabha. At least 23 ministers of Manmohan Singh’s government lost, including Home Minister Sushilkumar Shinde, External Affairs Minister Salman Khurshid, Communications Minister Kapil Sibal, Health Minister Ghulam Nabi Azad, Corporate Affairs Minister Sachin Pilot and Sports Minister Jitendra Singh. Manmohan Singh, who had announced his retirement earlier this year, did not contest. Outgoing finance minister P. Chidamabaram’s son Karti Chidambaram lost from his father’s constituency after the latter opted out of the contest. And so did Lok Sabha speaker Meira Kumar (Sasaram).

All BJP stalwarts won easily including L.K. Advani (Gandhinagar), Rajnath Singh (Lucknow), Murli Manohar Joshi (Kanpur), Nitin Gadkari (Nagpur) and Sushma Swaraj (Vidisha).
The only BJP leader who lost was Arun Jaitley, leader of the party in the Rajya Sabha who was trounced by former Punjab chief minister Amarinder Singh of the Congress in Amritsar. Jaitley was tipped to be the finance minister in a new Modi government.

Rahul Gandhi, 43, who led the Congress campaign, managed to win his own seat of Amethi but with a considerably reduced margin compared to the 2009 elections.
He was up against rivals considered lightweight and could manage to salvage his seat, considered a family pocket borough, partly due to the efforts of his sister Priyanka Gandhi Vadra who campaigned there vigorously especially towards the fag end of the campaign.

But Congress leaders sought to firewall Rahul Gandhi, saying that they were collectively responsible for the results. They, however, said there would be introspection over the results as “too much was at stake.”

Modi tapped into people’s discontent and anger over price rise, corruption, unemployment and a sense among the middle classes that India had wasted its opportunities during 10 years of Congress-led United Progressive Alliance rule.

Though Rahul Gandhi sought to paint Modi as “divisive” and dictatorial and talked endlessly of the UPA government’s welfare initiatives, his strategy did not succeed.
He had little to show by way of achievement in governance as he had not taken a role in government despite repeated invitations.

Modi, on the other hand, built his campaign around the Gujarat model of development, having led the state as chief minister from 2001.
He raised hopes of a bright, promising future among the people, basing his promises on the work he had done in Gujarat.

The Congress made a strategic move not to declare Rahul Gandhi as prime ministerial candidate but that did not prevent a “presidential type” contest between him and Modi in the age of television. Modi got much more television space than Rahul due to his oratory.

Unlike Modi, who used technology and social media to bolster his campaign, Rahul Gandhi appeared not to have brought any innovation to his campaign. The Congress scion is not on twitter, a social media popular among the youth.

Gandhi has been slammed by his critics for being a reluctant politician, a leader who goes into virtual hibernation after phases of political activism and does not follow through on the issues he raises. His not being present at the farewell dinner his mother and Congress president Sonia Gandhi hosted for outgoing prime minister Manmohan Singh was widely noticed in the media.

Rahul Gandhi addressed just over 160 rallies during the Lok Sabha campaign, a third of the number Modi addressed.

Congress promises structural changes but does not outline roadmap

Congress president Sonia Gandhi and her son Rahul Gandhi, have taken responsibility for the party’s defeat. Congress president Sonia Gandhi and party vice president Rahul Gandhi offered to resign owning responsibility for the crushing defeat in the Lok Sabha polls but the party rejected it while promising a thorough revamp and structural changes and admitting it was “unable toconnect with the electorate”.

The Congress has promised a thorough organisational revamp and structural changes as measures to win back confidence of people after the party’s worst defeat in a Lok Sabha election but did not spell out the way it will be accomplished.

Both the resolution adopted at the Congress Working Committee meeting in New Delhi and Congress president Sonia Gandhi’s speech gave the party’s disconnect with the voters as reasons that led to the party just winning 44 of 543 Lok Sabha seats.

Party sources said that there could be a reshuffle of All India Congress Committee office-bearers in the coming weeks. The party has little time for recovery as it has to face assembly elections later this year in Maharashtra, Haryana, and Jammu and Kashmir and possibly Delhi.

While an admission of failures is likely to go down well with the workers, who wanted the leadership to do some plain-speaking, there is still no clarity about the kind of change that will be brought about in structures of the party, its scale and its timeline.

Party vice president Rahul Gandhi has been advocating direct elections to fill various posts and opening up the organisation and the resolution indicated the party could go in that direction as it talked about creating “opportunities and structures that will pave the way of a thorough revamp of the organisation at all levels”.

Former minister Kamal Nath has suggested that CWC members should also be elected and not nominated by the Congress president.

However, a section of the party is not satisfied with the outcome of Rahul Gandhi’s moves to usher in internal democracy in Youth Congress saying that it had brought in a crop of leaders who were not adept in agitational politics.

While the resolution and Sonia Gandhi’s speech talked about the party having failed to read the profound changes that had taken place in the country during the ten years of UPA government, there was no indication from the party how these will be addressed in the coming days.

Sonia Gandhi said the party should ponder why its support base has eroded and if the party was in tune with the aspirations of the youth and keeping pace with the change.
She also said the party needed “clear-headed and fresh thinking that will help us correct our shortcomings” but did not elaborate.

According to Congress general secretary Janradan Dwivedi though there has been a feeling among Congress workers that Rahul Gandhi had not been properly advised by key members in his team. There is also palpable discontent among workers against many Congress ministers for “not paying them due regard” while in office.

There was also expectation among party workers of general secretaries being held accountable for the party’s poor performance in across states. The Congress could not reach double digit mark in any state and failed to open its account in many.

Sources said that general secretaries offered to be held accountable at the meeting but the common refrain at the meeting was for “collective responsibility”.

Rahul Gandhi led the party campaign that was heavily built around the UPA regime’s achievements though there was a sense of dejection among voters on issues of price rise and corruption – which Manmohan Singh, speaking at the meeting, termed the ones which the government failed to communicate with the people.

Sources said that most members harped upon lack of proper communication during the last few years.