The grains of India’s past and future 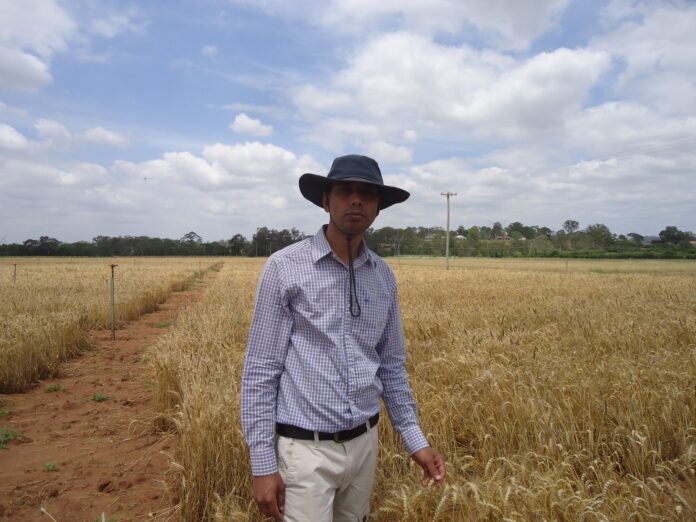 Hanif Khan from Northern India has spent the past six months in rural New South Wales learning how to breed wheat that is more resistant to rust – a disease which can cause widespread losses in wheat crops in his homeland.

A recipient of an Australia Awards Endeavour Research Fellowship, Khan has been studying at the University of Sydney’s Plant Breeding Institute in Cobbitty.

“The scholarship has given me the opportunity to study at the world’s finest institution that specialises in rust resistance in wheat,” Khan said.

“I’ve been able to work alongside many scientists at the top of their fields and brainstorm ideas on wheat breeding techniques. While working in India at the Directorate of Wheat Research, we were looking for new sources of rust resistant genes but we did not have the expertise.”

After rice, wheat is the most important crop in India. Recently, wheat rust disease has become a serious problem in Northern India affecting the livelihood of farmers and impacting food security.

When Khan returns to India at the end of December, he hopes to use the knowledge he has gained to introduce new rust resistant genes in wheat varieties.

“Farmers are suffering a lot of losses and spending a lot of money on pesticides. This also has a big impact on the environment. The most economically effective way to deal with the problem is to incorporate more effective rust resistant genes in the variety of wheat grown in India,” Khan said.

Khan grew up with a love of farming and grains. He was born in a small village and his family had a small piece of farmland. After school, he helped his family tend the farm.

“My family grew local cereal crops like pearl millet, a traditional grain developed by farmers over centuries. One of the biggest problems our local farmers face now is monocropping. Farmers no longer grow a variety of traditional local crops, instead they are now growing single high yield crops like wheat,” Khan said.

“It’s been necessary for our farmers to grow crops like wheat because they produce a larger yield and help to improve food security. But we also need to preserve the old native crops.”

“We should preserve the seeds of these traditional crops. We’ve seen the importance of this in the current rust resistant wheat crops. Many of these new varieties were bred from old preserved wheat strains. I believe the traditional Indian cereal crops may also have special properties that we may need in the future.”

Hanif Khan is one of 56 Australian government scholarship recipients who studied at the University of Sydney this semester. Students came from 33 different countries including Ghana, Indonesia, Mongolia and Nepal.

The Australia Awards are international scholarships and fellowships funded by the Australian government. They offer the next generation of international leaders the opportunity to gain the knowledge and skills they need to make a difference in their home countries.